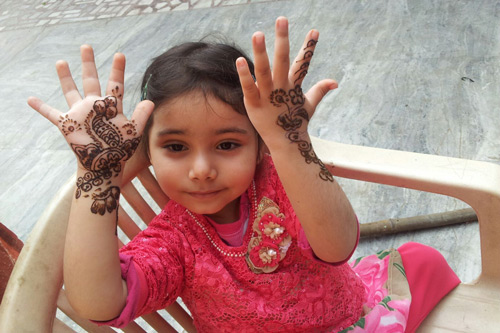 Today I will give you an example of why you should not lie to your child, something which unfortunately happens a lot, I believe not only in India.

About ten days ago, a few of our guests wanted to have henna painted onto their hands. Our massage therapist Shilpi knows how to do that and so the ladies spent a nice afternoon getting artwork onto their hands. Obviously, the kids also wanted to. The boys wrote their names onto their hands and Apra got a beautiful flower painting.

Now just day before yesterday, Apra came into the office and asked Ramona for money. She explained that she needed it for buying henna paste because we didn't have any and Shilpi would need to buy it and she would have to go with her for that, too. The last part was added with an assertive nodding of the head so that we should not anyhow get the idea to say no to that!

So Ramona pulled out a note and gave it to her. Of course you can go, she told her with a smile.

Only a minute later, Apra stood in our office again, crying this time and trying to explain in heaving sobs what had happened: Shilpi now didn't want to go to the market. There was henna still in the house but she wouldn't paint it on her hands as this was not something you did every day.

We immediately knew what had happened: Apra had wanted to paint her hands again and had started pestering Shilpi. Instead of telling her no however – because that can be difficult or create an unpleasant situation – she lied! She told her we didn't have any, thinking that it would be the easiest way to make her give up.

Apra however is now at an age that she knows problems are there for being solved and so she went to do just that! We don't have henna? We need to buy some. For that I need money. I can get money from my Ma – but I need to make sure I can go, too!

She solved the problem on her own, proud of it, too, only to discover that she had been lied to!

This is not how you should treat a child! Never, ever do that! She was terribly upset because obviously, she had been looking forward to getting the painting after having solved the problem! With this, the disappointment had been increased much more than if she had initially been told no!

Not only will your child learn how to lie but he or she will also not learn to listen to a ‘no’! That is something we and I believe millions of other parents are constantly working on: if I say no, it is just no and we won't bargain or discuss this further! I can explain why but in the end, there are also matters where a child needs to simply accept the decision of the adult!

That’s what they need to learn. They will not however learn it if you lie to them! It may seem easier to you in that moment but finally, this will get back on you and in a negative way!

So we need to talk with our staff members as well, telling them to help us teach Apra the meaning of no and not lie to her!