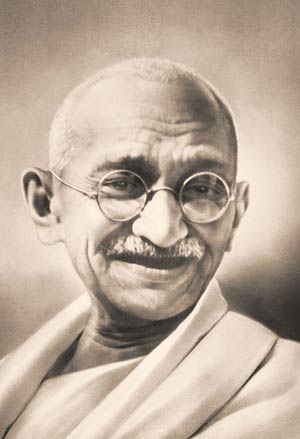 Today is Mahatma Gandhi’s birthday, a national holiday on which schools, banks and offices stay closed. The nation celebrates, newspapers print birthday greetings to the late ‘Father of the Nation’, articles describe his life in shorter or longer versions, people post pictures in social networks, TV channels show various documentaries on his life and government politicians offered flowers in his memory at the Raj Ghat in Delhi. Just like all these people I am also thinking of Mahatma Gandhi today and you see, I even dedicate a blog post to him.

I am not however going to write another summary of his life. I am not going to reiterate the dates and events that lead to India’s independence. I guess you have heard and read enough of this already. Maybe you have been fed up with all the Gandhi-praising lines, articles and shows and have then found some articles which were not as enthusiastic of this hero of India. Writers describing his faults, his mistakes, writing about discrepancies in what officials want us to believe and what historically happened and some even wondering about his sexual preferences, his idea of living a pure life and what exactly happened in between him and women.

I am also not going to write one of those articles. You can find enough of these if you just make an online search. No, I want to answer all those people who are currently creating a very negative image for Mohandas Karamchand Gandhi, those who are upset by the worship and the honours that people give him and those who want to belittle his role in India’s way towards independence.

There are such people, at least in India, who write statements full of contempt and hate for Mahatma Gandhi. I sometimes can read how people curse him and use very bad words for this man who usually receives the highest honours.

I want to ask these people, who are you to create such feelings for this man? Who are you to even say bad words about him? What have you done in your life that you can put equal to what this man has done? A fight in which he pledged non-violence, a revolutionary way of resistance, an idol for thousands and millions people of his time and the times to follow! There is a reason why people hold him in high respect and I think you should understand those reasons and consider them!

Obviously there may be a justification for some of the points of criticism, too. After all, this man was just a human being and no human being is faultless. We cannot all agree about our points of view, that is normal. And I definitely cannot pass a judgment about his sexual life – for that I don’t know enough about the facts and then also I believe that it might have just been his private matter.

Of course there are always people who are interested in creating a national hero and for them this hero has to flawless, although no person can be that. Others, who are interested in destroying this image will present every mistake they can find. Any of those mistakes however does not take away even a tiny bit of the respect that I feel for this man. Following the concept of equality and non-violence in a time when discrimination and violence were a daily occurrence was and is still remarkable and demands our respect.