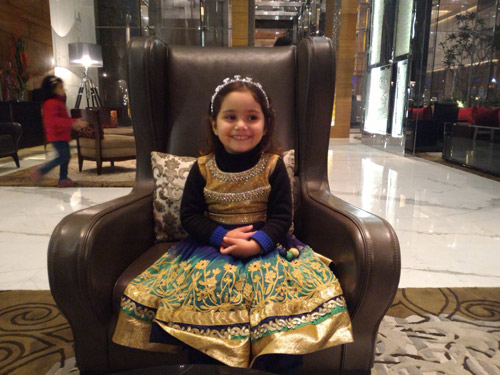 We are back in Vrindavan now and although our trip to Delhi – or rather Gurgaon – was not actually successful and didn’t serve its purpose, we of course have collected a few more impressions. Many of these have something to do with Apra, with whom it is always fun to go out, no matter where. People of course also react to her, not only she to them – and this time I found one way of approaching her strange: a man offered her to play with his mobile phone!

We were having breakfast at the hotel, something which Apra always enjoys to the fullest. She was picking something from my plate, then from Ramona’s, in between ate from her own. While we were enjoying thus filling our bellies with fruit, toast and more, the hotel’s restaurant manager approached our table to ask whether everything was alright. Ramona and I answered that we were enjoying our meal very much.

Apra waved when he did but when he asked what her name was, she was too shy or maybe too busy to reply. He asked her how she was and when she didn’t give a reply either, he asked her: ‘Do you want to have my mobile?’

Ramona and I both knew that this would not have the desired effect on Apra. We don’t give her video games to play, she has some educational games on our iPad and just in general, she is not completely crazy about phones. As expected, Apra shook her head and continued eating which finally prompted the man to move on.

Ramona and I looked at each other and knew we were thinking the same thing: is this a new thing to make children like you? Offering them your phone?

If it is so, I think it is a sad development of our society! A video game for bribing a child? Anyway, aren’t we trying to teach children to be friendly and nice to everyone, not only those who give us something? And do you really think if the child takes your phone to play with, he or she would have any kind of reason to then talk to you? The kid will get totally absorbed in the phone, not in a conversation with you.

As a parent, I especially wonder what you would actually suggest my daughter should do on your phone. What kind of games do you want her to play – and what if I didn’t approve of that? Another thought, this one a bit funny – would you like her going through your picture gallery? Or would you not actually give her the phone at all, just offering it for teasing?

We are teaching Apra to politely reply questions for her name and wellbeing. While she may not actually follow these manners yet all the time, I would prefer you not trying to bribe her. Some normal interaction would be much better and, in my opinion, much more effective!