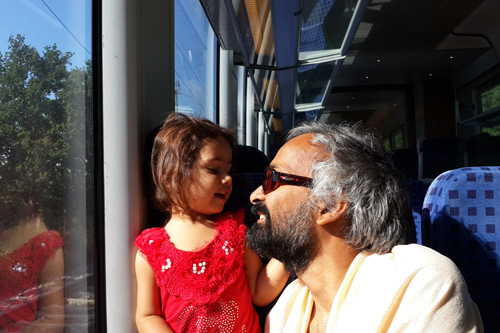 Sitting in the train, this time from Wiesbaden to Lüneburg, we had to think of the last train journey and laughed again. It was quite a memorable journey – and I think you would enjoy reading about it, too.

When we started in the morning, we had a look at our ticket and realized that we had taken a very tight connection – with five changes and only a few minutes changing time at each of them! But, we thought, we would try our best to make it and take this adventure!

We had to laugh a lot already in the first hour or two, as we were constantly looking at the ticket and the travel plan, then back at the current station and again at the clock to see when we had to get off. The single train trips were quite short at first – half an hour and one even only three minutes. And whenever we reached the station where we had to change, we hurried out, over to the next platform and then into the next train.

At one station however, a small countryside station, we were supposed to change platforms – but there was a railway crossing barrier down, in our way, and no subway or flyover or any alternative way to cross! With us were another four passengers, all Germans, who all stood in front of the barrier, clueless how to get over. It needed some Indian spirit there! Yashendu and I, after a second of hesitation, decided to cross the track Indian style – walk around the barrier to the other side! The second we started that direction, all others followed and we all made it to the train we would have otherwise missed!

Well, when we finally had reached the fastest of our trains that day in which we were also going to be for about two hours, we could settle down. The first thing we did was to unpack our breakfast – and while we did that, we noticed that we were quite entertaining for our seat neighbors.

They were two elderly women who subsequently commented each of our steps to each other: "Where they live, they only need such clothing because of the sun, not for warming themselves!" "They are quite hungry!" And after our breakfast, when we all were tired "They are all falling asleep, just the girl keeps on waking them up and doesn't want to sleep!" During the whole journey, they again and again smiled at us and we laughed about the way how we were observed.

The funniest thing happened however when we reached Frankfurt where we were going to change for the last time, to go to Wiesbaden. Everyone had already got up and gone in direction of the doors, as the train was approaching its final station. We were the last to go and the moment we got up, one of us did something Germans always tell me they never do: a loud fart was clearly audible in the train!

The reaction was hilarious! The ladies that were now in front of us and had previously noted and commented on everything we were doing, suddenly looked away politely and everyone around them tried not to laugh. Seeing this, we couldn't hold onto ourselves anymore! We laughed out loud and couldn't even stop anymore! This seemed to cause even more confusion around us. We were still laughing when we were finally out of the train!

It was a wonderful adventure – and right now we are in another one: our train is already two hours late!

Bad Service on Airplanes and Losing of Luggage – 7 Apr 08

Choosing a Spouse for an Arranged Marriage – 12 Jan 10

Gobhi Palak – Recipe for Cauliflower with Spinach – 23 May 15

Connection of Money and Happiness – 20 May 11