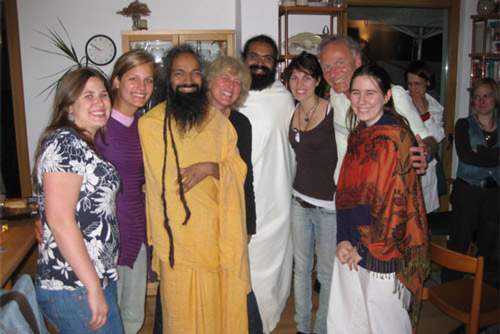 Last week, when we were sitting together with Thomas and Iris, we somehow ended up talking about a funny experience we had together. Let’s start from the beginning.

We were invited along to a friend of Thomas. He had met us before, too, and thus invited us along for his birthday party. It was at his home and when we arrived, there were 15 to 20 people there, some talking in the house, some enjoying the garden.

After looking at the house ourselves, we started looking out for the food. It was buffet-style, so that everyone could take a plate and fill it with whatever he wished. We were really hungry, as we have the habit of eating only twice a day – and had not eaten anything since breakfast. We had confirmed before that it was vegetarian and thus we took two plates for the three of us and filled them with the different items. We thoroughly enjoyed the food. We also don’t talk while eating, so while the other guests on the two long tables only put food in their mouths in between sentences, we concentrated on our food and finished it way before the others did.

Our host, who had seemed very happy to have two very exotic guests, came around and placed two big bowls on our side of the table. It was dessert, yoghurt with berries and the host asked us to enjoy it. There were small bowls in which we took out some yoghurt. After tasting, we decided that it was not sweet enough and reached for the sugar – something which is a normal occurrence for us in Germany, as people here don’t make their desserts as sweet. With some extra sugar, it tasted great!

While the others were still at the main course, we refilled our bowls. Several times. It was delicious – and the two bowls were not big enough for the 15 people or more who were around, so we were sure, he had placed them there for us and more would be at the buffet table.

We shared some with Thomas, Iris and Ramona – and finished off the dessert!

With the last spoons, we emerged again from our food meditation, slowly started looking around and then noticed something: there was no more of this yoghurt!

We were shocked – had we just finished everyone’s dessert? Yes, we had! And suddenly we had the urge to laugh! It was just impossible, too funny to hold on! We got invited by a person whom we didn’t really know well, we were in his house, at his birthday party and we had just eaten up the dessert for fifteen people all on our own! It was hilarious!

We all kept on laughing for a while, including Thomas, Iris and Ramona, but I was still very happy when I saw our host’s wife come into the room two minutes later, carrying a birthday cake. The others would finally get some sweet as well!

Whenever we think of this story, we have to laugh out loud. And we are sure for one thing: he will either not invite us again – or make sure he has tons of yoghurt dessert and sugar ready, waiting for us!

A wonderful Combination of Music, Yoga, Dance and Making of Love – 24 Aug 14

After Import in the West, Tantra became red, white, black and sexy! – 6 May 12