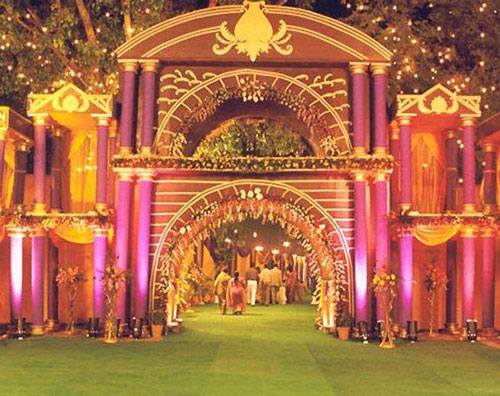 In the past two days I described the situation of lower class and middle class married people who stay in their arranged marriages even though they have problems. I explained the reasons for keeping up the relationship and the pretension to be happy while actually having big fights at home. I know people have been waiting to read the reasons for the high class to react in the same way – after all they would have enough money to cope with a divorce. Today I will explain why they, too, avoid a breakup and a divorce.

You can imagine, if people of the lower class take loans to afford marrying their children and the middle class has long-time saving funds to be able to pay for dowry and celebrations, how much the high class would spend on their weddings! For them, money is not a problem and it is normal that they celebrate in the biggest five-star-hotels with countless different food items, a first-class entertainment program, waitresses and dancers from abroad, lots of jewelry on the bride, on the groom and being exchanged and obviously a dowry in huge amounts! Millions and millions of rupees are spent, the guest list is enourmous and it is the biggest show-off of all times!

This is what this class does a lot: showing off money. Every function and celebration has all this, so wedding planners have to come up again and again with new, expensive ideas for sensational weddings that top the ones of the previous wedding season! Their weddings are extravagant and you will meet the most reputed people on those events. It is an announcement of the wedding with fanfares and trumpets!

The bride is welcomed into the huge mansion of her in-laws. There is enough space, they don’t have the problems of the middle class that they are 24 hours together on small space. All the money of the world cannot prevent tension and problems when there is no love and lots of ego.

After such a big show on the wedding however, how could they accept failure? How would that look like in front of society? They know so many people, all of them would be gossiping about them! No, they cannot afford that – so they pull a curtain in front of their private life problems and show a different face to their surroundings. Nobody might ever know, except maybe their employees who hear their fights through the doors of their bedrooms.

Additionally there is the fact – and that is true for all levels of society – that it is difficult for divorced people to find another partner. They may find someone who is divorced as well but on the market of arranged marriages, nobody would like to marry his son or daughter to a divorced man or woman. Damaged goods, when the women are concerned. Men who have been left – who knows for which reasons? Maybe he was beating or a drinker… it must be something really bad, otherwise why would someone go until a divorce?

There is the catch-22: if you stay in your marriage, you are unhappy because you don’t have the happy married life you wished for. If you get divorced, you won’t find a partner again to found the family you are wishing for. Why? Because everybody thinks you are such a bad person that someone even took a divorce from you. Which is the lesser evil?

What I have been writing about arranged marriages comes from my experiences, from what I have seen all around me and my own personal opinion. Of course everybody is an individual and there are many arranged marriages that work just fine because of the partners’ mindset. The number of problematic marriages is high though and that is why I tried to point out reasons and difficulties.

Purnendu’s, Yashendu’s and my Memories with our Mother Ammaji – 20 Dec 12

Travelling in India safely as a single Woman – 20 Oct 14