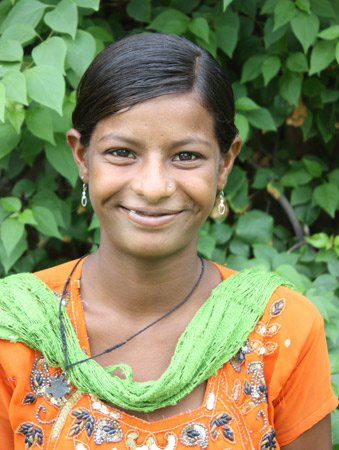 After having told you in the past days about the experiences in our school children’s homes in general and already mentioning the situation of girls and women in India, I would today like to talk about another problem: the early marriage of girls. For this, I will use the example of one particular girl at our school: Pooja.

Last week one of our teachers was approached by a girl of her class, the 3rd class. The fifteen-year-old told her teacher that she would not come to school anymore in the new school year. Upon the question why, the girl said that her parents were planning on marrying her in a few months.

Three days later, Ramona and Purnendu stood in front of her home. They had anyway visited Pooja’s home several times already but never had all children been at home so that they would have been able to take their video. By coincidence, on this day the whole family was there. Pooja is their third daughter and has one younger brother and another two younger sisters. The two elder daughters are already married and have each two children.

Upon the question to the parents whether they were planning on marrying Pooja this year, they replied with a clear ‘Yes’. When Purnendu then asked Pooja whether she wanted to marry as well, she replied ‘I will do what my parents wish for me to do’. What followed was a lengthy discussion in which Purnendu told the parents in all details why it was not a wise decision to marry their daughter in this year.

He started with the legal reasons: before a girl is eighteen, it is against the law to marry her to anybody. They were not very impressed by that – although they seemed a bit uncomfortable. Then he started asking whether they had any expenses from her education that they would save in this way – no, because she is going to our school where they don’t have to pay even one rupee. Finally, he told them about the benefits for Pooja’s future if she studied further. That even women from simple situations like theirs are today successful business women, supporting their families at home. That it would be a guarantee for Pooja that she would be able to earn money if she needed – because one never knows what the future brings.

They finally agreed to let Pooja continue her studies. The most beautiful thing to see was the smile on Pooja’s face after this decision of her parents. It is too early – but it is not a rare occurrence among poor people! We often see young girls with babies in their arms that should be their younger siblings, not their own children!

It is horrible to think what these teenagers experience already before they turn adult, which responsibilities they have and the emotions many of them must be going through.

We are happy that we can sometimes help those girls prevent their early marriage, as we could with Pooja. These are the successes of our work that may seem small in whole but which are huge for the individual children. And for us.

We know we may have to visit the family for the same purpose again next year. But for now, we have gained one more year of studies for Pooja.