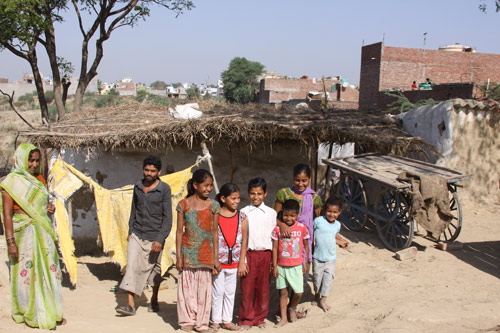 I started telling you about the experiences at our school children’s homes. On Monday I told you how many poor people were working in temples and Ashrams, singing religious songs or doing ceremonies. Yesterday I described how a TV had become a necessity even for the poor. Today I would like to write about something even one of our volunteers noticed who accompanied us on a visit to the children’s homes: there are so many girls!

When you go to the poor areas where the children of our school live, there is definitely a female majority sitting at the doorsteps of houses, walking down the streets and watching you from the roofs. Elderly ladies, mothers with babies in their laps, teenage girls with wool and knitting needles in the hands and little girls running around. In between the crowds, a boy or two. Definitely a minority. How come?

There are several reasons. The first and most obvious is that the men are at work while the women work at home, cleaning, washing and taking care of the kids. The next reason however is not so easily explained.

Not as many girls go to school as boys do. That, too, is a fact. Many poor people just don’t consider it very necessary for their girls to learn a lot. Actually, the main work that they should learn really well is how to run a household and how to raise children. This is something they won’t learn at school, they will learn that at home. Learning by doing. That’s how many boys are at school while their sisters, younger and older, are at home, helping their mothers with the household chores. For the mother a welcome help and something that both parents consider as necessary for the future of their daughters.

Still however, when you go to the families and you ask about their number of sons and daughters, we often see that a family has four daughters and two sons. Three daughters and one son. Even five daughters and no son at all.

The families still produce one child after the other in an effort to have at least one male successor for the family business or at least the family name. At least one boy who will take care of them when they are old. At least one son who will not get married off to another house like his sisters.

They are not educated enough to realize that having six or eight children will increase their financial difficulties. That they already don’t have money to feed their four daughters. That they cannot afford marrying their four daughters and will have to sell whatever they have just to give them at least a little dowry or pay for the wedding.

If the first two children are two boys, chances are that the parents are satisfied with their family. The focus is on giving birth to a son.

An attitude that will keep them in their poverty. Them and their children as well.

We want to help them make a change. Support them by teaching their sons and daughters. Maybe the next generation will understand.