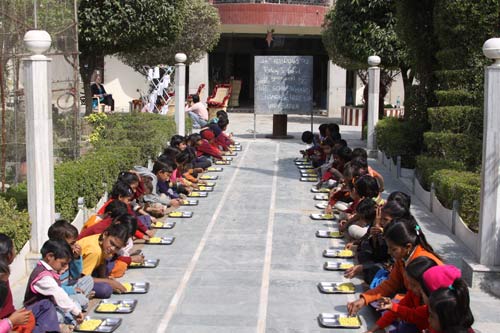 It is very well known that all over India there is still child labor. The whole development of the last years and decades has not brought much improvement to that situation. Our little town is not an exception.

When you walk down the road, you can often see how there is a small boy in a shop, holding a cleaning cloth and wiping the shelves – in the morning at eleven o’clock when all schools are open. Or you see a girl, standing next to a stall, selling fruit to a customer. There are even children under ten! They do their work and they earn their money – maybe about $10 per month. Everybody sees this but they keep their eyes closed. Do you think that the police and government officers don’t see this? Of course they do, just like you! It is just out in the open, nobody is hiding it! But nobody takes any action!

You may ask why I am writing this today. I feel much pain when I hear that children whom we were supporting and who are still less than 14 years old are doing this kind of jobs. The problem is that I feel helpless. What can I do about that? I don’t know to which percentage the child wishes to do work instead of going to school but I know that the parents prefer this and that is why they send them to work instead of sending them to school. The biggest crime is done by the person who gives them employment.

There is of course a law against child labour. If you go to the police now, though, what will be the effect? The first thing is that everybody knows about it anyway. They actually already know about it. These children’s job is not on papers, though. They get cash at the end of the month, so there is no proof that they are employed. The child will say that he or she is not working there, the employer will simply deny employing a minor and the parents won’t admit sending their child to work, either. The police and officers who should be working against this don’t have enough heart to do something on their own – why would they take action if I request them to?

We can only try to talk to the parents and try and convince them to send their children to school. We have done that often and we have many such children in our school. What can you do however if they don’t understand your arguments? What can you do if they think of the money that they can get now instead of the money they could earn if they were more educated, if they could at least read, write and calculate? They don’t see the value of education and sometimes we fail to make them understand.

In many places in India children work in dangerous conditions. That may not be the case here in Vrindavan but even if they clean, put products from one side of the shop to the other or run errands for their employer, they work instead of going to school!

I see people going into those shops. They see the same thing that I see. Indians and westerners alike close their eyes and look away. I cannot say the name of any shop and I cannot name those children because the system is corrupt and it would be defamation – but my heart cries for those children. The only thing that I can ask you for is not to buy in shops where you see children working. Ask the shop owner why there is a child working there. Get him to think about it and let him know you don’t buy there because of the child he has employed. This can be your little contribution for making a difference.

I still keep the hope though that the future will look different. We are doing our best to make parents and children understand and I hope that those employers will also someday stop taking away the childhood of innocent children just to save some rupees. We will continue our efforts and I see every child who comes to our school as a success against child labour.

Blackberry is Ready to Get Hacked in India – 17 Aug 10

Christmas Celebration at the Ashram in India – 25 Dec 08

Difficult Decisions: when is someone ‘not poor enough’ for our School? – 18 May 15