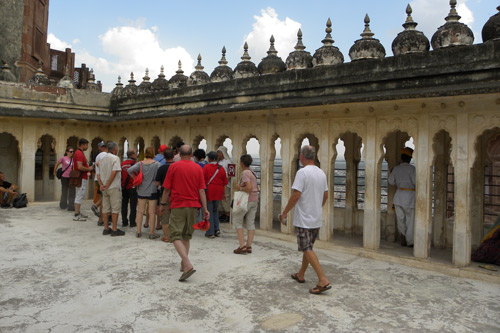 Last week I started writing down some tips for western women travelling alone in India and had to even write a second part with such tips, as it was quite a lot. While I was focusing on what one should do last week, I would like to add a few aspects from another point of view today:

1. Don’t walk around alone outside when it is dark

Yes, I agree, it should be safe to be out on your own at anytime and anywhere you are but unfortunately the world has not reached this point of safety yet. In India, there are many places without streetlights and if you are not just in one of the busy streets around the temples or the main market, it gets very dark when it gets dark. Especially when you are in an area that you don’t know or somewhere where you know that there aren’t a lot of people anymore in the evenings, it is advisable not to be out on your own.

2. Don’t do what you wouldn’t do at home

This is a point that I believe is very important. When you are out travelling, you often experience a sense of freedom that comes from being away from the duties and restrictions of your daily routine and your life at home. I agree that you can feel freer in India in many aspects than you can in many western countries. This doesn’t mean however that you should abandon all basic safety rules. If you don’t do things at home, there is mostly a good reason for it – loosen up in general and let your mind free but not when it comes to your own safety!

Ah, the dress code question. I often hear people suggest western women to ‘wear Indian’ when out on the road, as though a sari or Punjabi suit would cover the fact that they are foreigners to this country. As though this would decrease their risk of being sexually harassed or even worse. As though Indian women don’t experience any such issues. I have already made my point of view clear that clothing is not the reason for rape and that Indian women face sexual harassment far more often than western tourists.

So I don’t believe that dressing in Indian clothing has any beneficial effect. It won’t change the fact that you are a foreigner, that you are white. You will not blend in. Ever. On the contrary, I think a western woman in Indian clothing might even be more interesting because it is something that is not normally seen. Your white skin in a sari? You look extraordinary. After years of living here, my wife still gets all those looks of curiosity when she is out in town, no matter what she wears. So forget about that.

BUT: remember that whatever is not normally seen becomes sexy. In Indian culture, a woman can show her full belly in her sari, which would be considered sexy in Europe, without anybody even looking twice. Her knees however are never to be seen. So I would normally back up the advice of covering shoulders and knees and maybe not show too much of cleavage. While it may be normal in your culture, it is seen as sexy here and if you want to avoid attention, just don’t take the mini-skirt along.

While you are following this advice however, I just want to add one more thing: you don’t have to overdo it. In general, capris are fine, just as t-shirts with short sleeves are. It doesn’t have to be long sleeves and long pants always.

Come to India and see for yourself – the big cities are full of modern Indian women in western clothing. So don’t worry, I think you will manage to find the right clothing!

Again, I would like to continue this topic tomorrow.