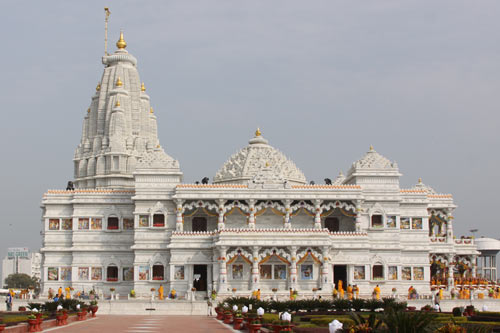 Today is the starting day for a three-day inauguration program for a temple in Vrindavan, called the Prem Mandir. The name means ‘Love Temple’ and I wrote about it before, nearly exactly three years ago. In that time it was in construction – now it is done and ready for the public to enter.

It has been more than ten years of building work and some years ago local people were talking about immense figures of money that went into this temple. They were saying it would cost 140 million dollars. Today it is said that the building actually cost over a billion dollars! It is built completely out of Italian marble with carvings around the building and semi-precious stones in the walls. Situated at the beginning of Vrindavan – on the way from Delhi – this building will definitely catch the eye of many people entering Vrindavan.

Maybe some people will see it the same way that I do – as an unnecessary waste of money that could have been used to educate poor children or do other charity work. Vrindavan already has 5000 temples, so why do we need another one? 100% of people in India have access to a temple but 65% of the population has no access to a toilet. Wouldn’t it make more sense to build toilets?

This enourmous temple was built by two gurus and their organization. The main head of that organization is a guru called ‘Jagadguru Kripalu’, who is now 90 years old. His main disciple is Prakashananda, not much less in age. Prakashananda was the one who initiated the building project in Vrindavan and was the main person behind it. The temple should already have been inaugurated a year ago but in that time Prakashananda was not available – he was sitting in front of a court in Texas, accused for sexual abuse for minor girls. On the day when he was convicted though, he was nowhere to be found – he ran away and is now on the list of America’s Most Wanted. They suspect him to be in Mexico but maybe he will never be found and will die in hiding.

Obviously the temple had to postpone its inauguration because the main person was missing. It took them a whole year to schedule it again – and they used this year to remove his name, pictures and whatever reminded of Prakashananda from the temple. It is as though he was never there.

Their main guru Kripalu doesn’t have a clean record either! He himself has been accused of molesting women and girls of the organization and has even been arrested for rape, although he was never convicted for this crime. He and his organization are however known to use spirituality and religion as a way to have sex and to get more money. People tell that they train preachers, both male and female, and once they are trained, they go to preach. They get rich disciples, have sex with them and start extracting money. They lure more and more people into their organization and even ‘recruit’ young girls for their guru’s pleasures.

Kripalu himself dresses up as Krishna or sometimes even as Radha, inviting his female disciples to have a divine experience with him. For some it is nice to have sex with a spiritual wrapper – it is their fantasy and they think they are having intercourse with God and receiving a blessing. Others are ashamed afterwards for how naïve they had been. Many leave the organization and don’t tell anybody about the abuse that happened. And then there is one other kind of person: those who see what is going on, leave the organization and decide to tell the world about it, so that other people can be saved!

One of these women is Karen Johnson and today, on the same day of the inauguration of the temple she publishes her book about Kripalu, Prakashananda and their cult. It is called ‘Sex, Lies, and Two Hindu Gurus: How I Was Conned by a Dangerous Cult – And Why I Will Not Keep Their Secrets.’ She describes her experiences from inside the sect when she was a part of it and from after she left it – how she was harassed by followers who wanted her to stay quiet and how she talked to women who were abused by Kripalu. She has been running a facebook page about this for a long time and now gave an interesting interview to Vrindavan Today which you can read here.

I myself have experienced that they don’t like anybody to write the truth about them. After writing in my diary about the court case of Prakashananda, I got attacked verbally by their followers who started writing with different names and anonymously against me on different social networks and websites. For me, these people are criminals. Prakashananda is a criminal, he was convicted. There are many testimonies that could prove Kripalu a criminal. And why would you not call everyone who defends their actions also a criminal? I will not stop writing against them! Some of my well-wishers in Vrindavan have told me I should be careful with these anonymous people as they have money, criminal minds and obviously don’t want anybody to write against them. I answered them that it is very clear that, even if something happened to me or someone in my family, it was these people. And on the internet there is no way to stay anonymous. Their IP is recorded with each of their posts or online actions and they can be found. Then they will not be anonymous anymore – and they should be aware of this. So there is nothing to worry about – if anything happens, everyone will know who is behind it!

The worst thing for me is that all those things happen on the name of religion and God. People who search for guidance and help, people who are insecure and want the help of religion to find back to peace in their lives get sucked into that cult. I do appreciate this author’s effort and her courage to go against this cult with her book. I believe it is an important step to show people its dangers and I would love it if it got translated into Hindi and distributed in Vrindavan and in India. Then people could realize the truth and reality. The temple may be there but people should see what kind of organization is behind it.

Experience of the Flood in Vrindavan – 17 Sep 10