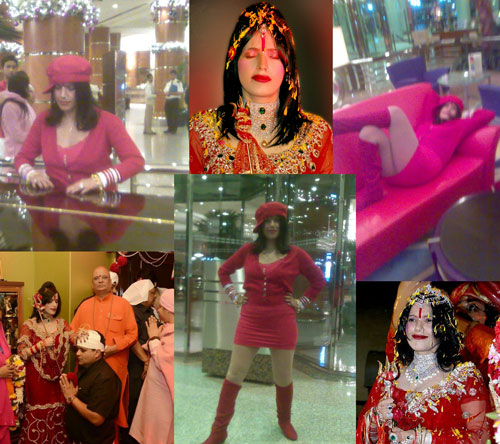 I have been quite busy in the past two days as well. Yesterday and the day before yesterday, I had two interviews for TV stations. The questions were all about a hot topic that has been going on in Indian news in the past days: Radhe Maa, a god-woman who is worshipped like a goddess. A female guru who recently had some private photos and videos leaked to the public.

I already introduced this woman in short to my readers in 2012 and told how she did lap dances on the laps of devotees in five layers of religious make-up.

This woman, whose real name is Sukhvinder Kaur, recently had a police complaint filed against her by a woman in whose family’s home she was staying. There were allegations that she had been violent against her and created pressure on other family members to ask her for a higher dowry.

These news were not as big however until the media got their hands on a couple of personal pictures that show Radhe Maa in a miniskirt, posing for pictures, as well as a video in which she is dancing to Bollywood songs. Ever since the day these photos leaked, they have been shown thousands of times on TV news!

Some people are in her favour, some against her. Indignant Hindus ask whether this is a sign of how modern life spoils religion and culture, they blame her for hurting people’s religious feelings. Other godmen say she was dancing in bliss, in a trance that doesn’t make you realize whether it is holy chanting or Bollywood songs you are dancing to.

It was two of such debates that I took part in, where some were against her and others supporting her. I actually asked what the problem was in her dancing. She is called Radhe Maa – that is the problem! There are many godmen and godwomen who attract people with their dance. Radha and Krishna also danced and nobody thought anything wrong with that! The media already knew she was doing lap dances with her devotees but didn’t present this as something problematic until they got their hands on a picture of this lady in a miniskirt!

It is your expectation on how this person, whom you have put in the place of god, whose orders you follow as if she knew you, your life and even your future, should behave. You put her on a pedestal but you only want to see her in her divine getup, not as a human being!

Who actually tells that an individual is qualified for being a godman or the female counterpart? Is there any institution where they pass a test? Do they know they should not wear miniskirts? And did anybody ever tell them they should not fool the public pretending to have divine powers? Who will take the responsibility for these people? Those who go there?

On the contrary, politicians and celebrities flock there to throw themselves at these fake gurus’ feet, showering them with money, showing the world they approve of them. Whoever wears such a costume and looks like a sadhu can be holy with a little bit of talent for acting! They invest money in TV advertisements, attract people and finally take a whole lot of money out of their pockets!

They don’t have enough with cheating them financially though! In Vrindavan, this is nothing new: police raids have again and again exposed godmen who enjoy the complete surrender of their devotees and call them to their beds! For some, this simply means that they get not only their spiritual urges satisfied but also their physical needs! For others, it is an act they feel forced to do in order not to anger or disappoint someone they believe is god!

In the TV interview I said that gurus like Asaram, who is still in jail for raping a minor girl, and people like Radhe Maa are products of religion. As long as organized religion exists, this kind of people will appear again and again. The root is religion.