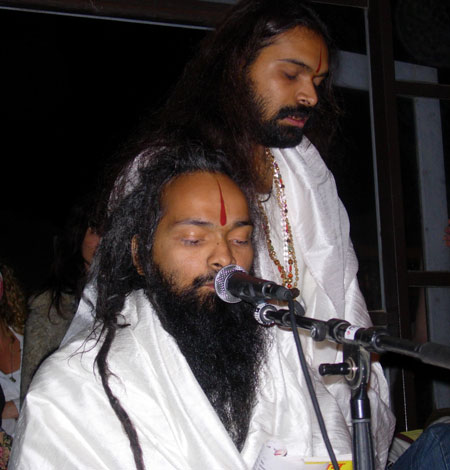 While Yashendu was curing his angina in Cologne in 2005, I went on to give further programs and travelled also to Amsterdam. I had been to the Dutch capital in 2004, too, and while I enjoyed my work there, I reached a conclusion after several visits: This is a town where I can stay some days, maybe a week but not much longer – it is just too crazy!

My contact and organizer was a young woman from Edinburgh who lived in Amsterdam. She had not been able to come when I was giving lectures in her hometown and so she had contacted me by email whether I would like to give program in Amsterdam, she would organize it for me. The dates were arranged and I was ready to go!

This town really left a lasting impression on me. I had been ‘warned’ by friends before, some in joke and some more seriously talking about the specialties of Amsterdam. One of them had joked saying it was ‘the most civilized place in the world’. Open as I generally am, I went and had a look myself.

My organizer and her friends showed me around town. At first I thought it was a bit like India – beggars sitting on the roads, having nothing to do, some of them staring into the sky, others talking to themselves, maybe a bit crazy or on drugs. When I had a closer look, I realized that they were the latter – on drugs. They were not begging, they were high or maybe drunk. Just there, sitting on the road. Well, I thought it was strange but I was told that getting high on marijuana was just legal and that even tourists came for that purpose!

My accommodation was in a very interesting part of town, too. We actually did not have to go far from the railway station – the friend of my organizer with whom I was staying had a flat very close to the red-light district. So we walked through this area and my organizer told me about prostitution there and said that it was all legal. I remember her saying ‘You know, they are like you and me!’ and she told me of people who had a very normal job and just did this as a side job to earn some extra money. When we turned the road, there was a house which looked to me like a shop, with a big display window. Displayed were however not garments or furniture – there were half-naked women standing and waiting for customers. Some had a curtain in front of their portion of the window and a red light was on. I was not very new in the west anymore and had heard a lot of stories about Amsterdam but of course I was curious. I think I asked a lot of questions about how it all worked, if people were happy etc.

Apart from that however, Amsterdam seemed like a beautiful city and that mainly because of the water everywhere! There were water channels to go anywhere in town and one day my organizer asked one of her friends, who had a boat, to take us along for a tour of the town. Sitting in the boat, we saw the complete city and I enjoyed that very much. In those moments I could understand the special attraction that Amsterdam has for many people.

It was another impression of Europe and in 2005 I got to share it with Yashendu, who joined me there once he had recovered from his illness. I had already spent years travelling in Europe but for him, freshly coming from India, it was a big cultural shock.

All in all however, as I told you, I decided that this was not a town to spend long periods of time in. It is very strong, very crazy, a lot going on – but it is fine to go there from time to time for a weekend or a week if you want to see something else than you usually do.