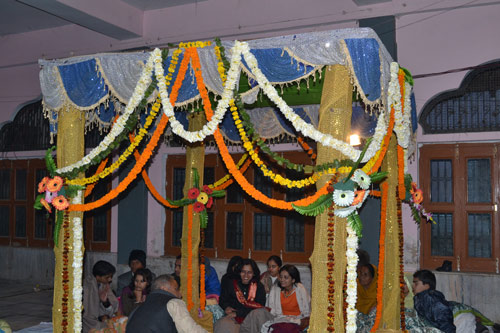 The big Question at an Indian Wedding: are they marrying a Stranger? – 28 Nov 13

I yesterday already mentioned that the bride and the groom on a traditional Indian wedding mostly sit formally next to each other on a sofa or on two armchairs. Yes, formally, not laughing, giggling or shining with joy but rather seriously and as if they don’t know each other. That’s why there is finally always this question on the list of westerners who come as guests to Indian weddings:

7. Is their marriage arranged?

8. So do they not know each other at all?

I fully understand that this is one of the most interesting aspects about an Indian wedding in the eyes of a westerner, because it is simply not in their culture at all to have anything else than a marriage out of love. They are strangers to this concept of arranged marriage and cannot imagine how someone of a financially well settled home, educated with even a university degree would agree on marrying someone his or her parents chose.

The reality however is that a majority of marriages in India are still arranged and normally the best guess in a majority of weddings is yes, it is arranged.

This can mean that they have never seen each other but it doesn’t have to. In very traditional families, it may still be the case that the bride and groom know only each other’s parents. More modern families let their children come along to the meetings with potential spouses and the young people get a chance to talk to each other. After that initial meeting, they have a kind of veto right and can refuse before any agreement was made. This means they can say ‘no’ to a boy or girl without anybody getting insulted.

Some of them even exchange phone numbers and are then in touch throughout the time of preparations, so that they can get to know each other before living together for the rest of their lives.

There are also love marriages but they are rather rarely celebrated in this big style, because mostly the families are not completely happy about the choice of their children. Some young people get outcast from their families because of making a free choice and not following the wishes of their families. If the fiancé or fiancée doesn’t fit into the parent’s idea of the ideal spouse, they may refuse organizing a wedding or just do it very low-profile to avoid attention. They are embarrassed in front of a society that thinks this is not how it should be.

Now some Indians may protest and say this is not completely true – but you have to see that while there may be many more happy love marriages in India’s few metropolitan cities, in the smaller towns and villages, life still follows old traditions a lot. And tradition says that your marriage should be arranged.

So even if you are on that exceptional love marriage wedding, you may not notice because they manage to play a perfect drama, pretending not to know each other.

What about their feelings, you ask? That’s another story and I will answer this question next week.

Does getting yelled at increase your Effectiveness? – 7 May 14