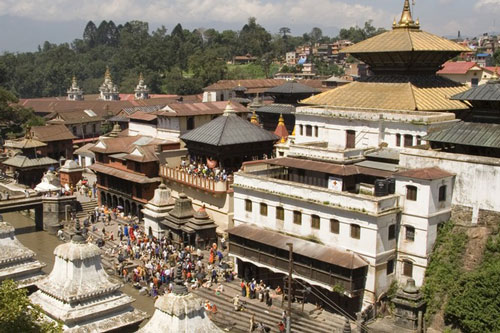 I have to come back once more to the earthquake in Nepal. Not only because help there has still not reached the people who need it the most but because some people keep insisting that on the day the earthquake happened, a miracle happened as well: the main Hindu temple of Kathmandu, the Pashupatinath Temple, was not destroyed. I think it is a ridiculous idea to call this a miracle or even a ‘proof of god’s power’!

The Indian media was repeating these news and a lot of religious people stated and shared it on their social media pages. The whole town was destroyed, just the temple is standing there! God saved the temple, it is so holy that even a huge earthquake cannot destroy it!

The same happened in 2013, when there were huge floods in North India. In the Himalayas, thousands of people died and so many houses were destroyed! In the pilgrimage town Kedarnath however, all the houses were completely destroyed but the Kedarnath temple was not.

It is fully fine for me if you believe in god and religion, if you have your faith and pray every day or do pilgrimage journeys – I don’t mind. I would give you the friendly suggestion however not to say such a thing like ‘God’s house could not be destroyed!’ because it will make you look insensitive and, frankly, also foolish!

If you really think god does everything that happens on this earth, he brought an earthquake or a flood, killed thousands of people, made millions suffer – and selfishly saved his house? And what about the hundreds of other temples which were completely destroyed and in which praying people and priests were killed? Hundreds, no, thousands of deities, little statues representing god were broken, destroyed, buried under rubble! Or are there different gods responsible for that? Weaker gods who could not save their homes?

But no, for you, the fact that this temple is still standing is an auspicious sign – and not due to maybe a better foundation and stronger construction which they could do because they had more money? More, anyway, than those poor villagers whose houses are destroyed but who are still waiting for some support of the government or international help!

I think you make fun of your own belief if you say such a thing. Why would your god, assuming he exists, not have the power to save all of his homes, all temples in Nepal? And again there is the question: why did he make all these people suffer? And don’t reply with ‘karma’ – I already wrote about that funny idea! No, I think there is no such god who would create an earthquake and then save one building because he thinks it is important!

But while we are talking about that – I heard there was a brothel, too, which didn’t even get one scratch… you can have your own thoughts about that!

A Substitute for Joint Families, an Alternative to Homes for the Elderly – 23 Sep 13

Happiness through Openness and Love – 17 Oct 09

Satisfaction as the Key to Happiness – 04 Feb 08