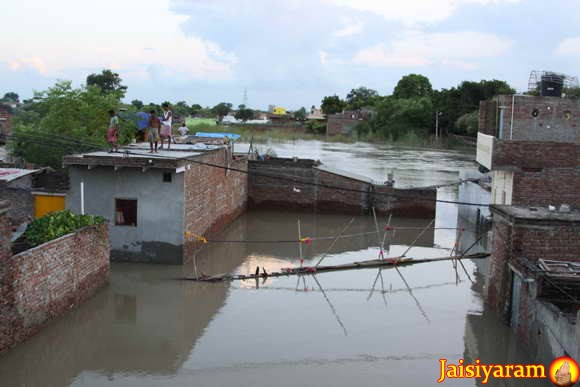 Yesterday I told you already about the current situation of floods in India and that it is raining nearly everywhere. Our friend Thomas, who of course knows about our work and how urgently we need support in these times, gave a charity concert to raise funds for the people affected by the flood. He gave the concert in the vegetarian restaurant ‘Zimt & Koriander’ in Wiesbaden where the owner Pawan has also set up a donation box that always supports the food of the children. Thomas played the sitar and told some stories of Vrindavan. People could read about our school and they could donate for our flood relief fund. We are very happy about this kind of effort of our friends and thank everybody involved to raise money!

We would love to be able to say that the situation is getting better but unfortunately it is not. And in our whole state it is raining. You do not need to be an expert to predict that if it keeps on raining as it has been since Saturday, the water will just keep on rising and it will get more and more dangerous. The water level has crossed the danger mark a long time ago. In our state 200 villages are affected by flood and 83 people died in our state alone. The highway from Delhi to Haridwar is closed as water is flowing on the street. You turn on the news or look into the newspaper and you get reports of water everywhere.

Some of you may have been to Rishikesh on a journey to India. If so, you have probably seen the big Shiva statue which was standing in the Ganga, about 15 feet over the water level. Sunday night the water rose until its shoulders and last night the whole Shiva statue was swept away. It is amazing to think how much water is everywhere!

In Vrindavan people are still worried and waiting for more water to come. It has been announced that one dam further up the river has released more water than it ever has in the last 100 years. All this water will arrive here in two to three days and the levels will rise again. The mother of Sanju, one of the boys who live at the Ashram, visited us here today and told that the Ashram in which she and many other families have found shelter is in danger of being flooded, too, if the water will rise much higher. We of course offered that she can come and live here, if that happens. We will keep you updated on what we are doing to help those people there. Please keep up your support by spreading the word!