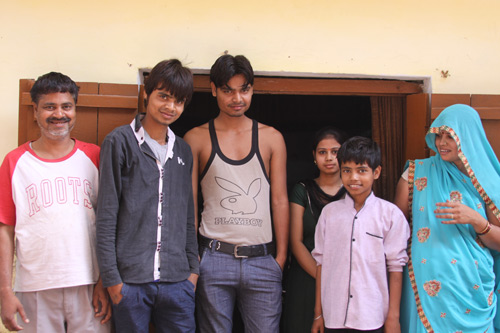 I would like to introduce you to the eldest of the boys in our lowest class, the LKG. It is the pre-school class in which usually children around five years of age learn reading, writing and counting with interruptions of songs and games. In our school however, it is not a rare occurrence that an elder child joins it because he or she has never really been to school, just like this boy. His name is Vipin and he is 13 years old.

Vipin is the youngest of four children. His eldest brother is 21 years old and works, contributing to the family’s income. He fixes motorbikes while his father stitches devotional clothing for deities. Together, they earn about 100 Euro. This is just enough for the family’s expenses: rent, food, clothing and, of course, the school fees, uniform, books and other utensils for the two next children to go to school!

Vipin’s second brother is 18 years old and goes to college, a rather expensive endeavor for a family with low income. His sister of 15 years still goes to high school as well.

With two children going to school and not having dropped out of school at a low age, you may wonder why Vipin has not been to school until now. He actually tried at a government school. There however, he was beaten for being naughty and as the school was anyway not of a good standard, so that he had not learned much even after several months, he told his parents that he didn’t want to go anymore.

His parents didn’t mind. They already had two children for whom they paid school fees and couldn’t afford a third one. He didn’t want to go to the state-school anyway and a private one, which he might actually have liked, would cost too much. So he just stayed at home.

We asked him what he did the whole day long. Nothing, he replied. We asked how come they had now come to our school for getting him admitted. The answer was that he had now changed his mind and wished to learn. Two girls in his neighbourhood were students at our school and had told him that we also took older boys and girls to start learning with the small ones. On top of it, our school has a non-violence policy, so he would not get hit and beaten by his teachers! And, most importantly for his family, we would teach him free of cost!

We were not sure, when we said yes to his admission, whether he would really come. But there he is, now already four months into the new school year, the first tests written and quite well on top of it. He likes going to school – and we believe that this will remain like this!

You can support us in helping children like Vipin by sponsoring a child or the food for a day.