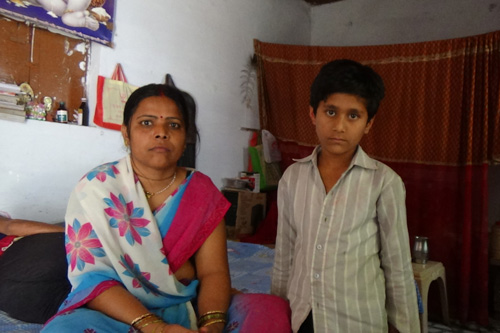 Today I would like to introduce you to Harshit, another boy of our school. He is a half-orphan and he doesn’t even live with his living parent, his mother. He lives with his aunt – who is not too eager to keep him either!

Three years ago, Harshit’s father suddenly seemed to have gone crazy. He said funny things, he started walking to places where he had no work or no reason to be and, most of all, he didn’t do his work as a tractor driver properly. His family brought him to a doctor who gave him medicines. He started driving the tractor again – but unfortunately did not continue taking his medicine properly. Sometimes he did, sometimes he didn’t. In the end, whatever had upset his brain won and his body succumbed. He died, leaving behind his wife, two daughter and one son, Harshit.

Harshit’s mother is now the one caring for her parents-in-law, the cow and the buffalo cow. And of course she also had the responsibility for all three of her children. Harshit, a lively boy, was getting more and more difficult to keep away from doing nonsense and so she asked her sister for help. Nearly one year ago, Harshit thus came to Vrindavan.

He is now living with his two cousins and his aunt who helps cooking food in an Ashram in the morning and sews blouses for women to add to the income. Harshit’s uncle words as security guard in a temple. They don’t have a huge income and with rent, food and the school fees for Harshit’s cousins, it can get quite tight!

This as well as Harshit’s habit of getting into difficult situations seems to make the aunt slightly regretful of her offer to help her sister. It is not easy for her to keep the boy either – but she does it because one should help family whenever needed.

For Harshit, this state is obviously not pleasant. His mother has not been able to visit him in Vrindavan for the past year at all. His father is no more and his aunt started to resent his presence in her home. But what to do? Maybe some of the naughty ideas he has have their roots in the difficulty of his situation!

There is one good thing however: Harshit got admitted to our school last year! He enjoys it there very much and has found friends. And that all without a burden for the family!

You can help us supporting children like Harshit! Sponsor a child or the food for a day!