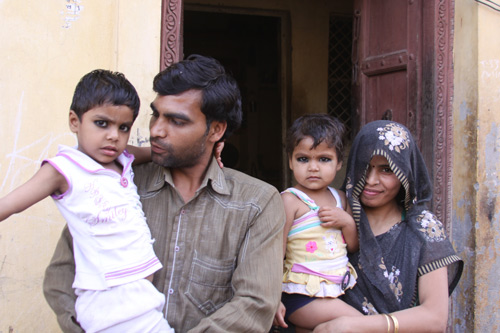 Today I want to introduce you to another newly admitted girl at our school: Khushi. She is five years old and since July she is in the LKG, the pre-school class in which the smallest of our school children learn.

Khushi has a two younger sisters, one is three years old and one is only one year old. Her family lives in a poor area of Vrindavan where many of our school children live. Actually, two of them live just in front of their house: Khushi’s cousins Neha and Shivam.

After having seen their progress in learning and knowing that he would not be able to afford sending his daughter to a good school, Khushi’s father asked us to take her at our school as well.

Khushi’s father works at another ashram in Vrindavan and earns approximately 65 US-Dollars per month. He doesn’t need to pay rent as he and his brother have inherited the house from their parents. His brother lives upstairs while he lives with his wife and three children downstairs in two rooms. The whole house shares one bathroom with toilet.

Although there are no monthly costs for rent, the money is always tight by the end of the month, so the family tries to save wherever they can. Khushi’s father even stopped eating at work – because his employers cut down money from his salary if he does. He tells us that he had been working at another Ashram, earning about 15 US-Dollars more but there he couldn’t take leave, even when his children were ill. That’s how he had to quit working there – because his younger daughter had fallen ill several times over the past months!

As he finds it difficult to make ends meet with his current job, he is again looking for work with a higher salary. At least, however, he is happy that his eldest daughter now goes to school and can learn there for free, so he doesn’t have to spend money for her education!

If you would like to help us supporting children like Khushi, you can sponsor a child or the food for a day and make a difference in their lives!