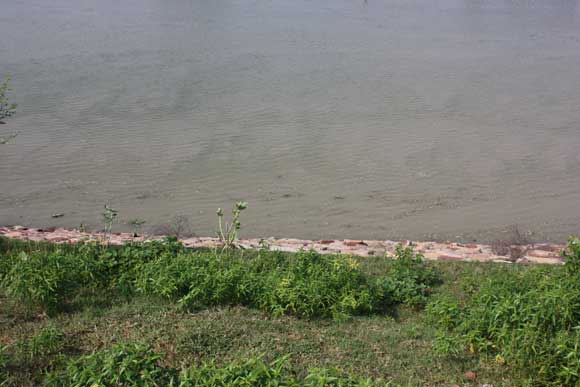 In our local newspaper I read that the water pollution of the Yamuna is so high that it is now not anymore possible to treat its water in a way that it can be supplied as drinking water in Vrindavan and Mathura.

The Yamuna is, after the Ganges, the second most important river of India. It has its source in the Himalayas and after flowing through the country for 1400 kilometers, its waters mix with the river Ganges. The Yamuna flows through the capital Delhi before surrounding Vrindavan on three sides and flowing past Mathura in direction Agra. All along its way, people depend on its water. They need the Yamuna to water their fields but also to get drinking water. In water treatment plants, the water is cleaned and treated so that it can be mixed with groundwater and supplied to towns and cities. 70% of Delhi’s water supplies are treated Yamuna water.

Unfortunately however, Delhi also dumps approximately 58% of its waste into the Yamuna and thus pollutes the water that much that the Yamuna is now one of the most polluted rivers in the world. India manages to pollute this water in a way that makes it impossible now for treatment plants further down the river, to get it clean again. Until now, they have been using, as usual, chlorine and alum to purify the water and then mixed the purified river water with groundwater before supplying it to the homes in Vrindavan and Mathura. They had more and more difficulties to reach the level of purification which is required to use the water. In the last months they have used 100 ppm (parts per million) chlorine and 70 ppm alum which is the double amount of what is normally used but still, the water is not clean.

You can imagine then how much dirt and how many chemicals are in the water which many people here in Vrindavan drink each day! At the Ashram we drink bottled mineral water, which also the participants of our retreats and all other visitors get, and every drop of water which is used in the kitchen goes through a separate filter which again purifies the water as much as possible. In this way we are sure that our water is not polluted but none of the poor families of our school children has the money for such a water filter, not to mention bottled water. They cannot afford to make their water cleaner and so they have to drink what they get! There are already statistics that imply that this has increased stomach diseases with the inhabitants of Mathura and Vrindavan. The water supply of the area will now fully depend on ground water.

Isn’t it unbelievable that we pollute this river so much that we get ill and die if we drink its water? And the Yamuna is not the only river which is that bad, the Ganges is in a similar situation. Of course the government has made plans and campaigns for cleaning both rivers and has spent more than 370 Million US-Dollar in this cause.

They planned on improving the treatment plants and the sewage system that directs the waste into the rivers but unfortunately the rivers have not got any cleaner until now. Due to corruption a lot of the money which the government made available, reached nowhere near the rivers.

People should not only try to improve the purification of the water, they have to stop putting all those industrial waste into the river! If we pollute nature, our rivers, our air and our earth in this way, we will only make ourselves ill! We will be the ones who will suffer from the consequences.

Many of my readers may wonder why exactly I am writing about this. Maybe they have nothing to do with the Yamuna and maybe never even heard of it before. For me however it is painful to read this as I have spent many days of my childhood playing at the banks of the Yamuna and swim in its water around Vrindavan. We even drank this water, just as it was. It hurts to see the current state of this formerly beautiful river.

Spiritual people here see the Yamuna as a holy river but they don’t see the actions that pollute its water. If, instead of only worshipping the Goddess of the river by rituals at the riverside, they could also take some real action against its pollution, it would help the river, its water and ultimately the whole country much more than any ritual could do.