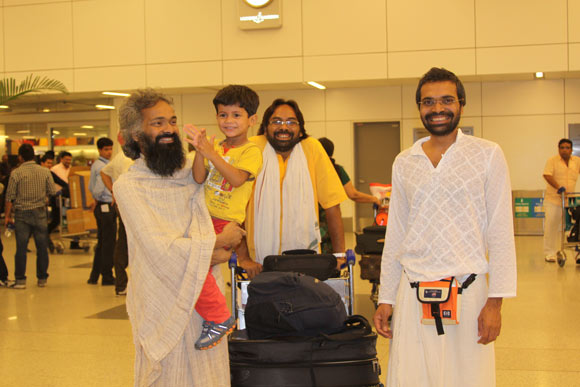 After uploading the diary onto the website for you to read it yesterday, we started packing our computers, the last thing that was still out. When we were ready, we brought our luggage out to the road in order to wait for the taxi that we had called. When the taxi was there however, we noticed that we had forgotten something: to tell the company to send a big car! Our luggage would never fit into the normal-size car that they had sent. Well, we asked the driver and he ordered a bigger car. That is how we were standing in front of the door with our luggage for the next ten or fifteen minutes, looking at the cars driving by and laughing a bit about the situation. It was not really a problem, we had calculated a lot of extra time and knew we would not miss the train to the airport.

When the big taxi was finally there, we loaded our luggage into the trunk and went to the train station. We were really nicely on time. The train was there when we arrived, we sat in it and a few minutes later we started towards the Frankfurt airport. We had half an hour and we used it well by eating the sandwiches which we had prepared at home for the journey.

The train goes until the airport so that it is very comfortable to just get out of the train and walk up to the departure hall. The remaining journey was also just as smooth and we were all the time looking forward to land in Delhi and come home. It has always, since I have been travelling, been especially wonderful to land in Delhi. It is coming home. When the plane goes slowly down from above Delhi and you see the city and then it lands at the airport, it is just a wonderful feeling.

When we got out of the plane, we already felt India’s September weather – warm and humid. It was half past twelve in the night but 30 degrees. We went to the immigration officers who were waiting to check our passports. The officers always look very serious and to foreigners this gives the impression that they are very strict. I have heard many foreigners say that they were afraid of being sent straight back home in spite of their valid visas. They are however usually very nice and often interested in where you are going. When the officer read that we were from Vrindavan, he started telling a story of when he had been there once. It was a heartily first welcome back in India and I thought that you would hardly get this in other countries.

We were of course welcomed by Purnendu and this time also by another person: Suraj was there, excited and happy. I had talked to him in the morning and had told him to come along to pick us up. This is how Purnendu took him along to Delhi for the first time in his life. It was the middle of the night but he was wide awake, jumping around and talking non-stop, telling us of his adventures in Delhi. At some point in the car however he got less active and his eyes slowly shut so that he slept until we reached the Ashram in the morning at half past four.

You can imagine that everyone is very happy that we are back and we are just as happy to be here. Naniji, my grandmother was waiting for us half of the night to be awake when we will come home. Ammaji and Babbaji have a shining light in their eyes and of course all children are running around us, eager to tell what has happened while we were gone. It is warm, it is also a bit humid, a lot is going on and we can enjoy being at home.