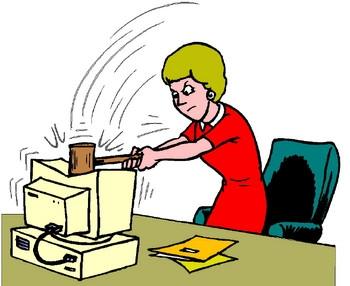 Computers make your Life easier – if they work properly! – 20 Jan 16

Ramona has been fighting with her computer lately and now it finally seems as though she has won the fight – which is why I would like to tell you about her victory today!

It all started with the purchase of a software that would facilitate the sending of donation receipts at our German charity organization. By the end of the year, when she installed it to make the entries, her computer also updated its software to the new office version.

When working on the software, she realized that things were not really working the way they should. She got errors and was unable to proceed which is why she asked the software developer for help. Via remote control of her computer, he was able to install some more softwares or files which made the whole thing work again. Ramona was happy: now she could finally finish all her work!

The next morning, the drama began: her outlook, the email sending program she normally uses, did not work anymore! Over the next four days she spent hours on the phone with customer support of Microsoft! Her father sat beside her, watching with her how the technical people once more took control of her computer and tried in every way to get her emails to work again!

Finally, in the evening before Apra’s birthday at half past nine, the end of the tunnel was in sight: outlook was working again and she could access her emails!

Somehow, in all of this, nobody had yet found the connection of the software, which was supposed to work with the previous version of office and not with this one! Can you imagine what happened the moment Ramona opened the software again and started using it? Correct: Outlook broke down again!

At this point however, Ramona knew what had happened and could, with a few attempts, fix her emails once more. But what to do with the software? Let’s ask the software developer once more!

To make it short, over the course of the past ten days, Ramona tried to run the software on four different computers, always finding that one or the other setting was not right – or the computer simply too old to work it. And finally, finally, the man who had written that software and had invested hours of his time, too, managed to make all settings for this thing to work!

Oh wow, the wonders of modern technic! Sometimes you love them and they make your life easy. Sometimes, it would have been so much easier without! But no, in the end, this will incredibly reduce manual work – so it was worth the effort!