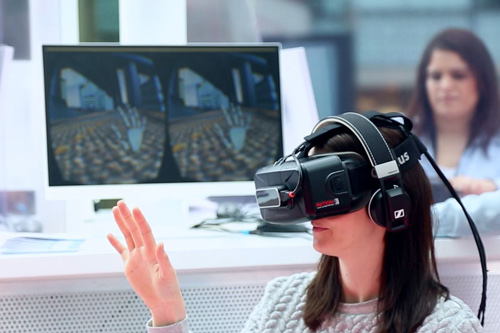 Have you seen those goggle-like high-tech devices lately which you can put over your head, attach your smartphone to and then enter a virtual reality with which you reach completely different dimensions of watching movies or playing games! You see things in 3D, you are all of a sudden in the middle of it, a part of it, as though it was you in real life within the movie or game! Sounds great – until you get the thought that this could actually make life even lonelier than it already is!

A few weeks ago, Ramona, Apra and I were in Gurgaon, I believe it was when we brought Monika to the hospital, and needed to buy something. We went into one of the many malls there and walked by a stall of Samsung, I believe it was, where these things were presented to the public and promoted heavily. A lady with a microphone approached people and told them they would get a voucher for a coffee shop in the mall if they managed to survive in a game called ‘Temple Run’ or something similar for more than 30 seconds.

Well, I was curious of the technology and my wife has a competitive gene in her which made her want to win the voucher. So we tried it – and it looked really hilarious! It’s a pity I don’t have a picture of me trying that thing on… but as expected, Ramona had fun with the game and won her voucher.

When we got piece of cake for Apra at the coffee shop afterwards, we sat together and talked not only about how it had made us feel a little bit dizzy to suddenly be in the middle of that game, not seeing your surrounding anymore, but also about the effects this may have on future relationships! Or is that only a thing for singles? Aren’t we going to isolate ourselves even further by this technology?

Turn it as you wish, this device practically removes you from your surrounding and places you into your own world. You can already notice this happening with smartphones anyway: instead of interacting with the physical people around you, everyone stares at their screens, often only passively taking part in other people’s online lives! Now place those goggles onto everyone’s faces and they won’t even be disturbed by you waving a hand in front of their faces!

Of course, your phone can show you the world in this way and you can dive into colours and never-seen places – but if you do this too often, you miss the colours, brightness and joys of a real world!

And it will definitely not help your relationship if the two of you sit next to each other on the sofa in the evening with your goggles on, in two different worlds.