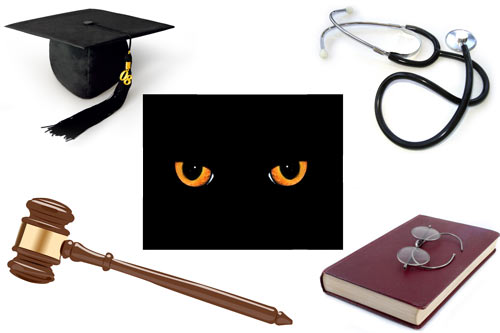 When I write about superstitious people like I have done in the last days, some western readers assume that I am talking about the uneducated people in the countryside who believe in such things because they don’t know about scientific explanations. Today I want to put my entries into the right light by explaining whom I am talking about there.

To illustrate my point, let me start telling you the experience of my wife Ramona when she went to a doctor with our daughter when Apra had her first cold. We have a good pediatrician in Mathura but on that day her practice was not open and so we went to another, renowned pediatrician whose clinic is anyway closer to our home.

It is quite normal here that there are long waiting lines in doctor’s practices because there are just so many people and only a few of them take an appointment beforehand. It is common practice to handle the crowd by letting not only one patient into the doctor’s room but straight away the next one, too, so that there will be no unnecessary waiting time for the doctor in between two patients. This is how Ramona was sitting in the room with Apra witnessing another couple’s consultation with the doctor.

The couple was actually the grandparents of the little boy whom they had with them, wrapped in a thick blanket. When they pulled the blanket back, the people present in the room could see a tiny newborn whose skin had a bluish skin tone and whose breathing could be heard like small sighs. The doctor started his examination and asked some questions. The baby was only one day old and the mother had already left the hospital. How this was possible with the state of the baby? The grandparents had no reply. They just asked the doctor to please save their grandson’s life. He was the only boy of their son after two daughters. At this point the doctor said something that made Ramona think she must have misunderstood ‘Ah, he is a boy after two girls? Then his chances are bad to survive. A boy after two girls normally does not make it’.

Of course the doctor admitted the boy as an emergency case to his own clinic but he did not give any hope to the grandparents that he might survive. And that all on the base of him being a boy after two girls! Ramona confirmed with Purnendu, who had come with her, that she had heard right and she had! It was shocking and for her a very clear reason not to go to this doctor anymore.

So you see, superstition, just like religion, is not limited to those who are uneducated. There are people who have a lot of scientific knowledge but nevertheless believe in such nonsense! Needless to say that in the case of a doctor this can even cost lives! Education helps in decreasing superstition, no doubt, but it is not a remedy for everyone. If people decide to be superstitious, they can be doctors, lawyers, professors and it won’t make a difference. Learning science as a subject in school or university is one thing but keeping a scientific point of view and attitude is another one. That happens all over the world! I have written about highly educated westerners who run after gurus who materialize gold!

I know many people personally and especially here in India who are highly educated but whom anybody with a scientific point of view would only call educated fools.