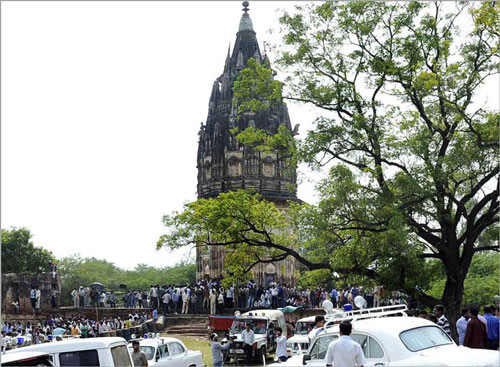 I am going to tell you a story now which may be hard to believe. But although it seems incredible, it is something that really happened in India. And yes, maybe India is the only place in the world where it is possible that such an idiocy can happen.

Some weeks ago, a Sadhu called Shoban Sarkar told the people around him that he had dreamed of a treasure. It was a treasure not very far away from where he was, in the Unnao district of our state Uttar Pradesh. The place for the treasure was supposed to be an abandoned fort of the 19th century. He claimed that this was not just a dream, according to him, there were really 1000 tons of gold and silver buried in that fort and if you just dug there, you would find it! But there was a catch: if you didn’t dig properly, all of the gold would turn into mud!

India is a country with a whole lot of believers. Believers are not limited to the general public however, there are also politicians and ministers who believe all kinds of things. Somehow the dream of this Sadhu reached a minister of the central government and with his help the ASI, the Archaeological Survey of India, was convinced that this story might be true. The ASI is a government body that takes care of memorials, the maintenance of historical sites and also the kind of digging that now started in said fort on government order.

The news was all over the media. It was sensational and of course there were also critical voices to be heard. A whole lot of money was going to be spent on a digging only because a so-called seer had a dream of a treasure? There were skeptical people like me who made fun or criticized the government for this decision. Others came out to claim a part of the treasure: the former king’s relatives wanted to have their share if something was found on their forefathers’ land!

TV channels arrived and placed their big vans and equipment next to the fort and did live telecasting from there! The prognosis was that if this treasure was found, India would be leading the world economy, as it was the biggest treasure that was ever found on earth! Suddenly that village was full of life, people had come from everywhere and with that crowd, there had to be more security! There was lots of policemen and security forces at all times. The villagers were not slow in taking their chance to earn something with their sudden popularity. They started selling samosas, chai, pakori and more snacks and food in little stalls and even just at the side of the road.

They were digging and digging for days! When they had not found anything for three or four days, attention slowly started to decrease. The first reporters started to leave and some people returned to their homes. The sadhu kept on encouraging people not to give up though. When after six or seven days they had still not found anything, the involved government officials were obviously getting worried about losing their faces. Searching for something to say, a government officer told that the ASI was not digging because of some man’s dream but because a metal detector had actually indicated that there was something! Another person asserted that even if they did not find any gold, it would be like a treasure for them, if they even found some old statues! Nevertheless, people started getting discouraged after a few days and when they left, the food stands slowly disappeared as well. On the 12th or 13th day of digging, they finally decided to close the project. They did not find the treasure.

Isn’t it incredible? How much money was wasted on this claim of some old man who obviously just wanted to have his fifteen minutes of fame? The Sadhu’s opinion is obvious: you didn’t dig properly. If you just committed to it properly, you would find the treasure for sure! What a country are we living in!?