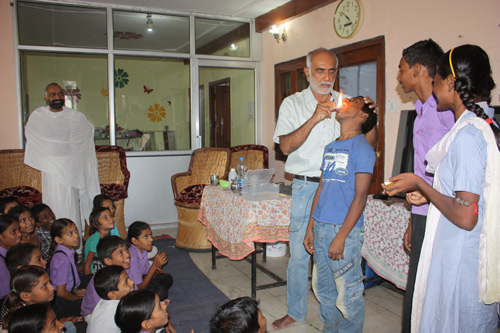 Today we had a program at our school which we had, although it was fixed on relatively short notice, anticipated a lot. Narendra Nayak, who is probably India’s most-known rationalist, came to visit us and give a presentation for our school children!

In 2009, when we were in New York, we stumbled upon a video of his early work online. In the video, he and a group of his students showed villagers the tricks of fake gurus and then exposed them, showing that these were not, as claimed, miracles performed with divine powers. I got in touch with him and for the past years, we have been following each other’s work. After our atheist meeting a few weeks ago, we were in touch again. He had plans to come to Delhi and offered to come to our school as well. I said it would be great to welcome him here!

That’s how he was standing in front of our school children this morning and spent three hours telling them that they should think before they believe anything, ask questions if they don’t understand and not worship anybody for allegedly godly powers because these don’t exist and we humans are all the same.

It was a pleasure to watch! The children saw with amazement how Narendra Nayak seemingly materialized a golden necklace, just like the already expired magician and celebrity guru Sathya Sai Baba used to do. They were in awe when one of their classmates could light an oil lamp that was filled with water instead of oil. They gasped when he apparently pushed a trident spear through his tongue. Excitedly, they watched videos of him performing surgery with his bare hands and deep-frying bread in hot oil, again just with his hands.

Several children and even teachers were called to the front and became part of the performance: they held a string that was cut through and then reattached as if it had never happened. They chose cards out of a deck which he then guessed, as if he was reading their minds. He touched their arm with a burning torch and put a burning piece of camphor on several students’ outstretched tongues without any of them being burnt!

Needless to say, everyone loved the show. But it was more than just a magic show! With every trick Narendra Nayak showed our children, he also explained how it worked. This made so many ‘miracles’ all of a sudden simple tricks achieved by speed, the right material or simply the basic laws of physics!

It made our children not only marvel in the tricks but also think about all the things they are told by religious believers about miracles. It made them wonder what is true and what is fake.