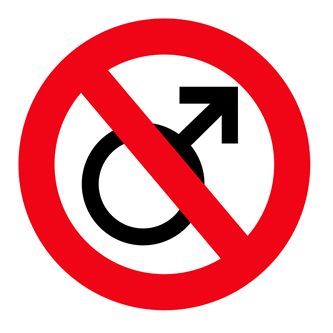 In Hindu scriptures it is said that women have eight times more lust than men. Obviously I can dismiss this thought only as an attempt of religion to control women and to keep men above them by showing them as more pure and sex as something bad. Recently however I read a quotation which is popular among feminists: Men love women for sex and women have sex with men out of love. I think this statement is just as bad as the one above! Why? Let me explain.

What are feminists really looking for? I always thought the answer to this is not only freedom of patriarchy and thus the paternalism and suppression by men but ideally ‘gender equality’. The goal is not matriarchy or the suppression of men by women. It is equality of both genders. If you want to reach that, you should not try to degrade men the way you do with the statement above.

By saying that men love women only for sex, you show that you believe men only have lust and no love at all while women are full of love and have sex only as a natural expression of this love. If you generalize all men like that, maybe due to a negative experience in your past, you simply refuse all of them together. The result is that you won’t be able to trust any man because which woman would like to have a man who has only lust, no love? You can choose any man to be ‘the one’ but you won’t trust him as long as you believe in the sentence above.

Men also have feelings and are not only their body! You are doing exactly the same to men which you are accusing them of: reducing the other gender to the body. But why actually is there so much partiality?

I have seen women who are only interested in sex. At the same time I have seen men who were fed up with that and were just longing for love. Both, men and women are human, their bodies are different by gender but then there is a big difference in between every single person’s personality, character, thinking and behavior as well!

There are a few, really very few, biological differences, aspects of men and women that are coded in their DNA. Many, many more of the differences that we see in between men and women however are because of the society that we live in! Men and women develop them due to exactly such sentences as the ones above. Men should be hard, women soft, men can go anywhere and feel safe but women cannot – society has created this picture itself by treating women differently than men, by giving men another position.

I have however met many women who break those patterns and are fully different, from the way they feel and think until the way they act and the same goes for men. As long as you talk like that, you can never reach gender equality! Men are about half of the population on this planet and you won’t convince them to value and respect you by degrading them. You have to talk about the individual, not the gender stereotype. You have to see how every single person is different from each other – and that every single one of us, man or woman, is a wonderful, individual being equal to you and those around.