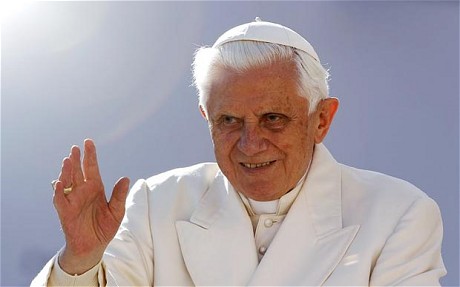 After the child abuse scandals and sex scandals of the Catholic Church that have been uncovered in the last years, the world has been waiting for a reaction by Pope Benedict XVI. Something. An apology, a call to action against it, any reaction! But no, even on his Easter speech to the world it seemed like this topic was not enough of an issue to bother the Holy Father. Next week however the world will finally be able to read about how stunned he was about the scandals… better late than never?

Next week the Vatican will publish a book based on the first interview given face to face by a Pope and everybody can look forward to get some interesting new statements. One of the most surprising ones is that he finally accepts that condoms might be a good thing!

Well, he didn’t quite say it like that. He moved only a tiny little bit away from the conservative statement that condemns condom use overall: “In certain cases, where the intention is to reduce the risk of infection, it can nevertheless be a first step on the way to another, more humane sexuality.” He right away makes clear that although you may use it to prevent AIDS from spreading, it is not the ‘proper way’ to deal with HIV and for sure you should not use contraceptives when you are married and both you and your partner do not suffer from AIDS.

So he actually only admits that men may use condoms if they know that they are HIV positive so that they don’t infect another person. He gives an example: “There may be justified individual cases, for example when a male prostitute uses a condom, where this can be … a first bit of responsibility, to redevelop the understanding that not everything is permitted and that one may not do everything one wishes.” He does not leave the opinion that you should not use birth control or that you should not have sex before marrying – God beware! No, but it seems that after decades of protests, debates and discussions, the pontiff finally realized that even the Catholic Church cannot stay that much backward to believe it is better to infect another person with a deadly virus than to use a condom! Many cardinals, bishops and priests who obviously live more in reality are already of the opinion that birth control may even be a good idea and much better than the solution of the pope who still suggests abstinence.

Nevertheless I guess we have to thank his holiness for granting all HIV infected men to have sex with their wives using condoms and all male prostitutes to use condoms in their profession. Should he himself ever get the joy of having sex, I think he should try it without a condom to be able to get full pleasure.