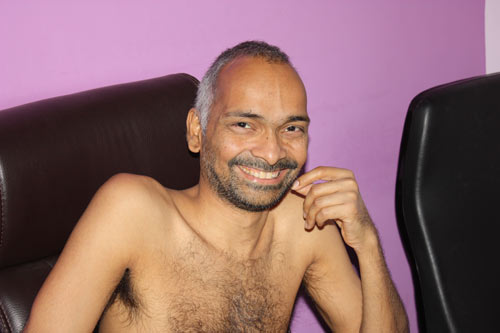 There are times when I write about very outrageous, unbelievable stories, like the incident when a father cut his own children’s flesh to perform rituals, and everybody obviously agrees that it is horrible that such things happen. At other times there are topics, like the issue of the fake guru Kumar Swami, when I receive both, very positive and negative feedback, the negative feedback in this case by his followers, who even wanted me to take my article down. And then there are some topics in which the main feedback that I get is eloquent silence.

I take a fact and I analyze it. I look at it from different directions and I reach a conclusion. I present this conclusion and then there is someone who has learned something which says exactly the opposite. His whole life he has acted in another way and decided to believe something different. Everybody reading my lines would agree and this person does, too. He feels inside that I am right! ‘Yes, there is something to it! But can I really admit this? Maybe I can just close my eyes and pretend that I never read about this – that will save me from a lot of trouble!’

Agreeing would mean a big change! It could change a person’s life to accept what he or she believed was wrong! It is easy and very comfortable simply not to reply. ‘Who will ask me about it anyway, it is the internet, a virtual world, after all.’

But you know inside yourself that you are not right, that there is truth to what I wrote. If you keep on pretending you don’t, you lie to yourself! Just because you have been told, because everybody was always doing it this way, because your scriptures say it should be like this, you think you have to believe this, too? No, you can make a change! I know it may contradict everything you ever believed in but you won’t lose anything if you give up a wrong belief! That is not your anchor or your life vest, you can survive without it! Don’t cling to it like a drowning man! See that you are free without it!

Instead, most people remain silent. Others, who have the urge to reply, cannot help but write a polite comment, disagreeing half-heartedly. They don’t have any valid argument against it anyway, they themselves know the truth. It is however not possible for them to publicly admit that. A conversation with them will always end with ‘Yes, I know, but I nevertheless keep on believing and thinking what I did before.’

I know that this is often a problem of religious people but also people who don’t believe in religion sometimes have a behavior or a way of thinking that they hesitate to change even if they know it is wrong. The fear of this change is strong. What will my surrounding say? I don’t want to step out of a group, out of the community! I will be different!

Don’t be afraid, you can make that change! Be honest with what you feel, that is most important. It is not me who will benefit from that change but you! To break your patterns and to start a new way of thinking which feels true to you needs courage. Be brave, you can do the change! If you feel different, don’t be stubborn, don’t hold on to what you thought was right but be free to choose the real truth. Only that will make you happy! And if you understand that it is the truth, others can understand it, too. You will never be alone if you believe in truth.

Middle Class Girls in India – You cannot divorce after saving so hard for your Wedding! – 2 May 13