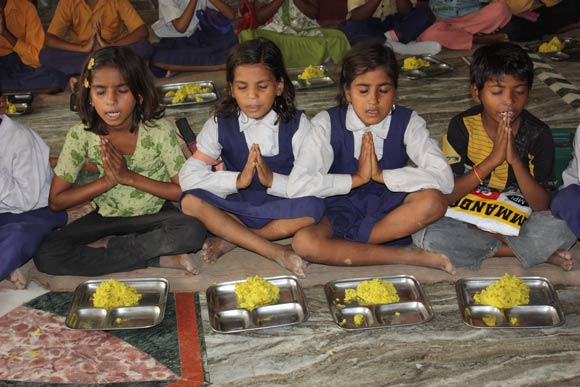 There is another topic that the local newspapers have been writing about in the last days and which I thought I would like to share with you, too. In Farrukhabad, in our state U.P., about 300 kilometers from here, a group of local people entered an Ashram, the Adhyatmik Ishwariya Vishwa Vidyalaya Ashram, damaged a lot of the property and even got into fights with the people of the Ashram. They were very angry with the Ashram, the Ashram owners and the Ashram inhabitants. They were also angry with the police, asking them to take proper action against the Ashram.

This news attracted my attention. Why would an ashram become the subject of anger of local people? It was not properly clear in the article what had upset them so much. The Ashram’s name seemed familiar to me, as if I had heard its name before already and I wanted to find out more about that.

When I did more research about the reason of their anger and what really was the issue there, I found a bigger story behind it. The police had been to the Ashram the week before but the people of the surrounding did not feel that they had done enough and in the proper way. They accuse the police of not acting although they have plainly seen that something was wrong in that Ashram. The police had been there because a father had reported his 17-year-old daughter kidnapped. They found the girl and returned her to her father.

The article writes that they also found over a dozen more minor girls, most of them very young. The Ashram staff allegedly could not give any information as to where those girls were from. The girls seemed to be too young to tell themselves and maybe have been kidnapped at a very young age so that they would not even remember. Now cases of human trafficking and illegal detention have been filed against the owner, a Baba Virendra Dev Dixit. The Baba himself however is absconding and nowhere to be found.

I tried to find out more about the man who is absconding and I found out that he was connected with Brahma Kumaris. They split up however and he made his own organization. He was then debarred by the main Brahma Kumaris and now has many centers in different countries around the globe. So you see, it is a sect that was created from another sect. Again, there is crime on the name of religion. There is a guru, a leader, who has teachings and offers them to minor girls and poor women. The public thinks he offers these women and girls a place to live and study, a better life and some spiritual input. Behind this curtain of charity however there seems to be human trafficking and kidnapping of young girls.

It is shocking to hear and read about this and it creates a bad image for charity organizations that run Ashrams. If such news can be read everywhere, who would trust anybody? And really, in the world of religion and gurus, a lot of such things are going on. I have however trust that it will be less and less the more people get educated and widen their horizon.

I was searching on google but could not find this article on its original page. We needed to look in google cache and found it there. Here is the article.