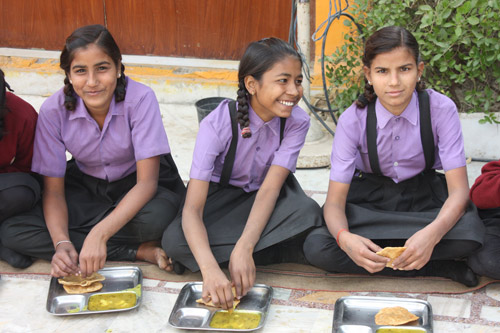 I told you yesterday that we are, from the next school year on, discontinuing the 6th and 7th class of our school and have dropped the idea of extending the classes of our school until the 8th. We knew that although we won't be teaching the children at our school anymore, we would keep on supporting their education. Finding a way however proved to be more difficult than thought!

There are a lot of schools in our town and of course news of one or the other somehow usually reaches the other ones. That’s why we were soon contacted and approached by a school which is not really far from ours. They knew about our school and the fact that we support poor children, providing everything for free. We invited them to come to the Ashram for a talk.

When the owner of the school came, together with the principle, I personally had a talk with him. He basically offered to take our children in his school. I was very straightforward and asked these people how much it would cost. I know that they are not, by any means, running a charity school. Their school is their business and the money which is paid at admission time and then every month as school fees is what makes their income. So I told them that not the parents would be the ones paying the fees – as they don’t have money anyway – but it would be us. So we wanted to ask for a great discount, as they already knew our situation.

The answer was very Indian. Which means that I didn’t get an exact figure – but instead I got a very generous answer: ‘Oh, don’t worry, we know how much you are doing for the good of society! You can give us whatever you want to give!’ You can imagine that I was very happy! We would be able to afford sending our children to this private school!

We called all 35 children two days later to our school. Our school’s principal walked over with these children to the other school in order to fill their admission forms and make it official. Unfortunately we were in for a nasty surprise: once they reached there, the administrative personnel named a sum they had to pay as admission fees and another one for monthly fees which were both far above our budget. On top of that there would be uniforms, books and stationary to be bought!

The principal called us, we called the owner of the school and the answer was: that is already a discounted price, we cannot do any more for you!

We were incredibly disappointed! All children came back, wondering what had happened. It was that which made us most upset! Had we known that we couldn’t send them to that school, we would never have told them about the possibility and given them this emotional rollercoaster! Why could that man not have been clear when he was sitting in my home and talking to me? Could he not have spared us and our children this disappointment?

Well, to make it short, we tried to find another school with a lower amount of fees but found that all private schools had approximately the same fee structure or higher. We found ourselves in the shoes of the parents of our school’s children – just that we were trying to find a school for 35 children!

Finally, we went to the government school where my brothers and I have learned at as well. We decided to admit our children there. Obviously, the standard of education is not as high as we would wish for them – but as the cost is minimal, we will be able to afford private coaching classes for our children and will thus support their education further!

This chapter has been the cause for a lot of discussions and thoughts in our home and heads. In the next days I will keep on writing about all these ideas, feelings and facts!

A wonderful Approach from a Prostitute – 10 Aug 14