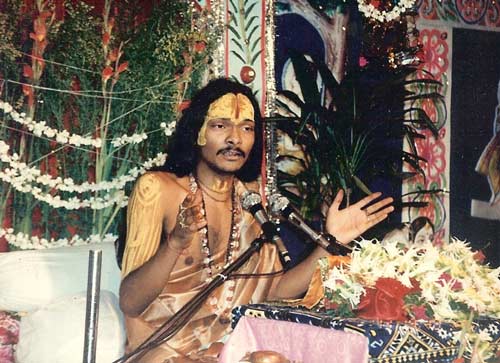 You all know that I have often criticized religion and many things that belong to it in my blog. I wrote against pieces of scriptures, against rituals, against different ways of worship, against problems that I see with temples and even against high religious leaders. While people mostly agree that there could be someone human misusing his powers, when I talk about the lacking sense or even harm of some rituals or the obvious stupidity of verses in scriptures, many people say that there I have a problem understanding it the right way. I would like to write today about this argument that everyone who criticizes religion is simply too stupid to understand religion.

Let me explain their argument once more: they believe when someone points out a mistake in scriptures or questions the sense of a ritual, it is not the scripture or the ritual that is wrong. There is no mistake in the scriptures, there is a mistake in that person’s thinking. Religion has no problem, that is fully fine. The person who voiced doubt just did not do a correct interpretation of what was written and simply misunderstood. That can happen to anyone, they say, don’t worry, we can explain you how it is correct, just come to our church, temple, mosque or scripture class. This is how many religious people defend their religion.

If you give such arguments, have you ever had the idea that those who don’t accept religion in their lives could be intelligent people, too? By saying that they misunderstand all those topics is like saying they are stupid, at least less intelligent than you, because you are able to understand it all perfectly well!

The truth is however that they are well able to understand what is written in scriptures and what is happening in rituals. They see it, they understand it but they cannot accept it with closed eyes. They think about it, consider it and if they see something they feel is wrong, they confront you with it. They actually make an effort and try to understand what you believe – not blindly but with reason and intelligence. And if they see nonsense, they refuse accepting it.

If you, at this point, practically tell them that they are stupid, that they did not understand it and maybe even say they should ‘simply trust’, it is absolutely no wonder that they become anti-religious. At that point they understand that religion manipulates and asks you to follow without deciding for yourself. So they decide not to go the path of religion.

If you look at my personal example, you will understand even better that there is no problem understanding religion. I have studied scriptures, religious books and different interpretations for thirty years of my life. I have preached religion as a profession. You cannot say that I don’t understand it! I have explained it to thousands of people, so if I now talk about the flaws, the mistakes, the controversies and irregularities, it is not because I am not well informed. Maybe not everyone looks at it in detail but I did and I know what I am talking about, so your argument is not valid here.

Don’t think everyone else is stupid. They, too, have a mind and you may even want to consider seeing your belief from their eyes once. They have tried yours and did not find it acceptable – now it is your turn!

Tolerance for Faith vs. Responsibility to save Children from Superstition – 9 Oct 13