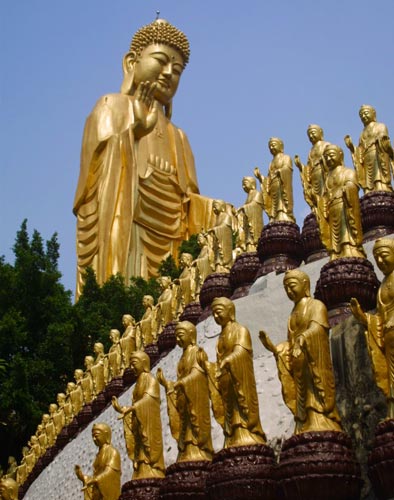 When I wrote about Buddha last week and mentioned that he created another religion instead of getting rid of religion, I could predict that there would be people who tell me ‘Buddhism is not a religion, it is a philosophy , a way of life’. And yes, of course I read this on my facebook post. It is not the first time that I read or heard this, so today I want to write in detail about this very statement.

But let’s first of all have a look at the definition of religion. I chose the Encyclopaedia Britannica as a source that I usually trust to give me reliable information. Here is the beginning of the definition of the word religion:

If you look at other dictionaries’ definition of ‘religion’, you get very similar entries. Ironically, and here I want to quote the Merriam Webster Dictionary, the examples for the word religion say things like:

There are many religions, such as Buddhism, Christianity, Hinduism, Islam, and Judaism.

So you see, the dictionary even gives Buddhism in the example for religions. And that is what every child learns in school about the five world religions! Both Hinduism and Buddhism are included in that list! In both dictionaries, the definition for ‘Buddhism’ starts with the words ‘a religion’. And if you think about it, it is obvious!

Hindus believe in millions of Gods, Christians, Jews and Moslems believe in one God and yes, Buddhists don’t believe in God but it is nevertheless a religion. You have Buddha and honour him, just like Christians pray to Jesus, the son of God or Moslems worship Mohammed, the prophet.

You are following a teaching with scriptures, too. Christianity has the Bible, Judaism the Torah, Islam the Koran, Hinduism the Vedas and you have the Dhammapada. I realize that in each of these religions there are again more scriptures that people also follow but I think I have picked the most important ones.

Additionally to this, you have the Lamas, teachers, people who are like gurus, who preach and teach exactly that which is defined as the basics of Buddhism. There are different teachings, you may add now, not only one, as you could say for Christianity, where the Bible is a very clear guide. The reality is however that there are many different teachings in Christianity, too! And again, in each other religion, too!

You have Buddhist temples, just like there are Hindu temples, Christian churches, Jewish synagogues and Muslim mosques. You have rituals and ceremonies. You have your religious paintings and sculptures. I read a funny sentence somewhere ‘Buddha himself was against statues and now he is the world record holder of statues of himself’.

You have a group that believes more or less the same thing. They identify themselves in this way. They are ‘Buddhists’. They are religious, they believe in a religion. Buddhism is a religion. That does not mean that it is not at the same time a philosophy or a way of life. That does not exclude each other! In the end that is what religion is all about – it is dharma, it is what you accept in life, it is your way of life. It is however additionally also organized, it had teachings, people want to spread and explain it. And also that is common to all religions, including Buddhism. There is also corruption in religion and I dare say that it is in all of them. I once wrote a diary about a corrupt lama, the Karmapa Lama, to name an example for Buddhism. I have heard many more such stories about corrupt lamas.

What I want to stress here is that it is a noticeable tendency of people that, as long as I write about other people’s religions, people appreciate it and support it. Everything is fine then, I can point out all bad issues of those religions but as soon as I talk about their personal religion, some people get upset. If you believe in a religion, you have to accept that it has negative sides, too.

Yes, Buddhism is a religion, a normal religion like the others.

Connection between Sex and losing Weight – 22 May 14

Friends can be Street-Friends or Longtime Friends – 23 Oct 10