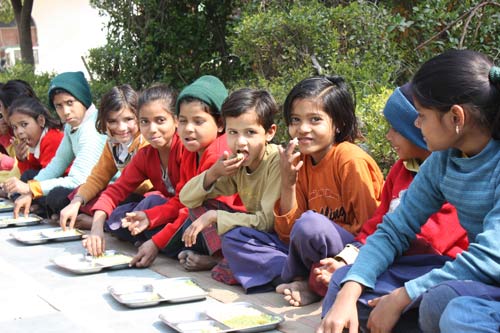 Abuse of Women, Creation of an untouchable Caste and more Crimes of Religions – 16 Feb 12

Everybody who knows me and those who read my blog regularly know that I am not religious and that I even say that I am against religion. On some occasions people then told me that being ‘against religion’ and saying that it is all bad would be ignoring the good things of religion. I don’t agree and I thought it would be worth explaining my attitude on my diary.

I actually never said that religion did not ever bring anything good to people. I believe however that religion has given a lot of space for bad things to happen. In an online discussion I asked my friends what organized religion had given to this world.

My answer to the question was that religion divided people and created hatred. It manipulated and still manipulates them and thus religious leaders can exploit those who search for help. Religion made people afraid of God's punishment and even taught that women are lower than men. The worst thing is that they fool people and then forbid them to ask questions – so that they blindly believe what is written in scriptures and taught by religious preachers. It has opened the doors to abusive people to get power over others and do as they like without having to justify themselves.

Of course religion wasn't meant for this but this happened and is still happening. There is proof for all of this. It starts in the scriptures where you can see ridiculous statements about the power of those who know the scriptures and also about the role of women in society. You can see how in many countries religion has had such a big impact that women are treated like inferior beings. Obviously you first think of Islam and the women there. But it happens in other cultures, religions and countries, too! Through religion men have got the power to abuse women, to order them how to live and how to dress not only in their places of worship but even in their homes. It is a work of religion that still today there are countries in which women are flogged and even stoned to death for having sex before their marriage, with another man than their husband or after their husband is dead. Religion is responsible for women not being allowed to the most sacred parts of some temples. It is according to religion that women here in India should not enter their own kitchen or eat with other members of their family when they are menstruating.

Another effect of religion is the caste system. It has its roots in the Hindu religion and its scriptures! Religion enabled those who wrote the scriptures to make themselves powerful and the highest in society while others are so low that nobody even wants to touch them. Through this, religion has created the ‘untouchable’ caste! Religion has created social structure, that is fine, but if this is the social structure that we got from religion, I think we would be better off without it!

In the same way, the most religious men of religion were empowered in a way that makes not only abuse of women but also of children possible! There have been uncountable stories of abuse by gurus. Hinduism is not the only religion in which this is happening, though! Look at the scandals of the Catholic Church! See how much abuse of children has happened in churches! It is religion that has given those men the power that made them God-like, so that others don’t doubt their actions anymore.

Religion has also been a tool for many to gain wealth. So many religious institutions are very rich and have enourmous amounts of gold and silver. I have been told that the Vatican is not much different. Tell me why so many of these Gurus and Swamis in India are extremely rich while it is difficult for many normal persons to get a full stomach? But you will find rituals and ceremonies described in scriptures during which you need to donate gold and money if you want to have a better life, go to heaven or want to realize God.

In my eyes religion has been used and is still being used for manipulating people. In all religions, it doesn't matter whether it is Hinduism, Islam, Christianity or any other religion, people go there with faith, for love, to find God and get peace in their lives but religious leaders and institutions have always found ways to fool, cheat and harm them. Scriptures were changed and written according to their own wishes and to their benefits and their control on people was and is big.

Surely religion wasn't meant for poisoning but it has had the effect of poison in history and at present too. People realize what I have written above and with more education and more awareness they turn away from gurus, leaders and institutions. Religion has lost its purpose. It has no future, the young generation is refusing it and I am happy to see it is slowly dying.

One Reply to “Abuse of Women, Creation of an untouchable Caste and more Crimes of Religions – 16 Feb 12”

Funny once you get used to it: India’s missing finishing Touch – 25 Jul 13

Ready to fly back after Holidays in Germany – 24 Jun 13

The Dilemma of Followers: Knowing about the Crimes of a Guru but unable to accept it – 11 Sep 13