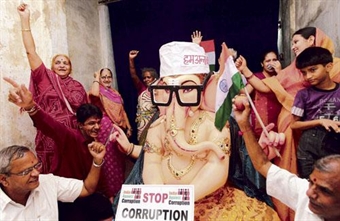 Here in India I sometimes watch news on TV and daily read the newspaper. While I was looking for news on TV, I stopped on a channel for a minute on which I saw Anna Hazare sitting on a stage and in front of him there were many people, some of them performing Aarti. Aarti is an Indian ceremony in which you worship a statue of God or a river for example with fire.

I had a very funny feeling when I saw this. Did Anna Hazare become a God now? Did he ask people to do this? But then I had a closer look and my impression was rather that he was not interested and even irritated by what people were doing there. So why do people worship a person if that person doesn’t even want to be worshipped?

I saw this on TV but later I came across an article and realized that he does not even need to be present, people do that nevertheless and they even make money with it! On 1st September India celebrated Ganesh Chaturthi, the birthday of the God Ganesha. India is a religious country with a Hindu majority, so of course there is always a big celebration, many ceremonies and in many cities they have big festivals with enourmous tents called pandals. This time you could not only see statues and pictures of Ganesha in the tents, there were big pictures of Anna Hazare, too! They did not only worship Ganesha in the ceremonies but Anna Hazare, too! And of course they sold T-shirts with Anna Hazare’s image on them and caps of the style that he is wearing.

I wrote before about the flexibility of Hinduism and here you can see once again that they do not mind taking in something new and changing their ceremonies a bit. Priests and organizers are like agents. Religion is their business, those tents are their shops and now they are selling the image of Anna Hazare. They have to sell something and get income to make their living and if they can attract people to buy at their tents by selling Anna Hazare as a God, it is fine for them. I believe it is human worship and it is wrong.

I know that many Swamis and Gurus are promoting human worship, even if they don’t say it as clearly as I do. I was against one of Baba Ramdev’s political ideas for exactly this reason. He wanted to change the political system that we have now in India, with more power in the hand of the parliament than in the hand of the president, to a system more similar to America, with the president in power. Ramdev tried to get higher on the ladder of his political career and may have even tried to become president. Imagine he changed the political system in India and became president with so much power. India is a religious country and many people have many emotions when religion and their guru are concerned. If he had become president in this way, he would be worshipped like nobody else in the country!

We have seen on examples all over the world that human worship is never good and cannot be accepted. Hundreds of names can be listed as examples but I believe you all have an idea what I mean and I don’t have to point out more names here. Anna Hazare was already seen with such people who promote human worship and I believe he should be careful. It can even weaken his cause because human worship is corruption, too!

Please do not understand me wrong, I am not blaming Anna Hazare for the worship of his person but the public and more than that those money oriented, religious people who want to cash in on his popularity. Please don’t do this! This is not right and surely not what he wanted. He did not fight to be worshipped religiously! Let him be Anna, don’t make him God. He is a nice person, let him be a nice human being. Don’t worship him. He woke you up and made you aware of a good cause but now the rest is up to you. I wrote a letter to him in support and one letter to the Prime Minister stating clearly that he is only a symbol for the fight against corruption. I even asked those who were opposing him to please support his cause because it is not about him but about the issue of corruption. It is now our responsibility, the responsibility of everyone together, to further fight corruption. If you put it all on him and make this kind of drama, the real spirit of this fight will get lost!

It is great that the media supported this issue by reporting about it. I thank them for bringing regular news out to people but I also want to say please leave him alone now! You don’t need to follow each and every step that he does as if he was holy. You create the image of a holy person by showing where he showers, where he eats, what he does and more! He is not a guru! You greatly supported the cause by passing out information but now you are responsible not to create this kind of image for him. I supported his campaign because of the fight against corruption, not to make him a God.

You create your World – for Placebo Effects and Happiness! – 16 Mar 15