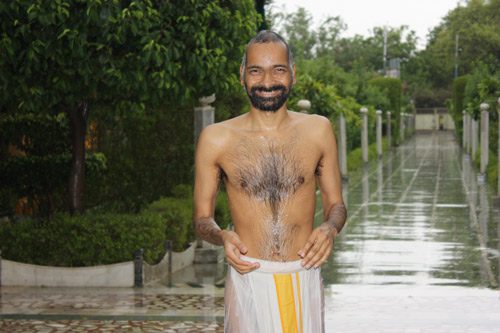 Sometimes I get asked ‘You write a lot about Hindu religion and things which are bad in it, for example the caste system. How come?’ I tell them that I was born into this, I grew up with this and called it my profession once. Obviously this has the consequence that I know a lot about it but I am not only against Hinduism, I am actually against any religion, against the whole concept of religion. I believe that apart from the negative things that happened because of religion, it is just wrong that religion wants you to be a blind follower and additionally religion wants to convince everybody to be such a follower.

I believe that the concept that religion uses for its following is wrong. The main idea and condition that you have to understand when converting to any religion is that you need to trust. You have to believe. Don’t question and don’t have doubts. Whatever you are told is true, even if it seems strange or wrong to you. You want to be religious? Don’t ask!

In this way religion limits the freedom of people and controls them. Sects do that even more strongly. And with all those restrictions on the thinking and on people’s opinions, you can feel that they want to hold people, want to keep them from changing their belief.

At the same time they send missionaries, priests and whatever those people are called in different religions to spread the word. There are so many people who have only this profession: spreading a religion, promoting a religion and converting as many people as possible to their belief.

This is where I believe the definition of religion does not only mean anymore ‘way of life’ or ‘philosophy’. It is not anymore the word ‘dharma’, about which I also recently wrote.

We have to think about what we want and what we accept in life ourselves. Who are you to tell me about my way of life? Everybody is maintaining their own lifestyle and philosophy which can even change from time to time. I want to be only human until my last breath and until then follow the dharma of humans, the philosophy of love and not the manipulation and control of religion. In this way I will be free to think what I like, to question everything and to believe what I feel is right.

One Reply to “Religion restricting Intelligence – You want to be religious? Don’t ask Questions! – 6 Jun 12”

Chakra Dance Party in Copenhagen – 9 May 10

Maybe your Friendships are alright just as they are! – 25 Sep 13

Hallucinations after taking Drugs are not spiritual Experiences- 27 Apr 14