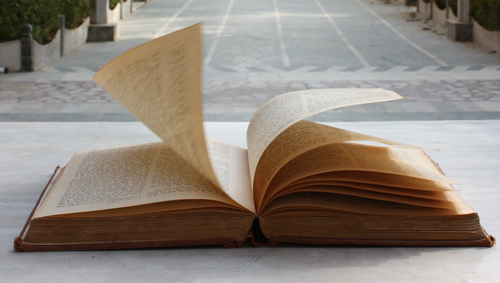 Why are holy religious Scriptures full of Violence and Blood? – 29 May 12

Yesterday I explained a bit about the beginning of religion and how it all started. At some point, people started writing the stories of their Gods down and this is how the idea and the problem of the scriptures began. I am sure most of you know that I am not a big fan of scriptures and that I don’t like it when people take scriptures literally or as proof for their statements. Some days ago I told one of my friends another reason for my attitude: the violence in the scriptures.

If you ever read scriptures with some distance of the religion they belong to and with a mind that is not occupied with the urge to believe what is written there, you will find that all those scriptures are quite violent. I can say that about Hindu scriptures and have heard about the scriptures of Islam, too. My wife confirms this for the Bible – even though the violence may be limited to this book’s first part. I am quite sure that this is true about the scriptures of other religions, too. Take any of those scriptures, squeeze them and you will see blood dripping out of them. They are full of war, full of blood, full of killing and pain.

The strange thing about this is that in those stories, it is God committing that violence! It is those beings who are considered the highest of all and their acts are written in our holy scriptures! It is described how many people were killed by Gods. Gods are carrying weapons, have powers to destroy and they use them, too. There is a Hindu Goddess who is wearing a mala of heads around her neck – can you give a bloodier image than that?

Of course, religious people tell me that God did not kill any innocent people. There is the devil and there is God. There is a good power and there is a bad power. God, obviously the good power, kills the bad ones and creates peace on earth again. In the end the good one wins. There is a happy ending and some kind of moral to learn from it.

What I don’t understand however is, if God is omnipotent – and obviously everyone believes that – why can he not provide a non-violent solution? Why does he have to kill? Could he not change the minds of the evil ones? Could he not, with one blink of the eye, make peace on earth?

I don’t see why we should accept any such solution of violence. There is more inacceptable behavior of Gods and authority persons or ideas described in scriptures. You can read about gambling, kidnapping, robbery and more! I heard of the Greek mythology and how their highest God Zeus preferred running after young human women instead of staying with his wife, the Goddess Hera. Adultery by Gods – an example for the people who read or hear of it?

But where exactly does this come from? How come there is such behavior in those scriptures? Just have a look at when they were written! In the time when people wrote down those stories, all around them this was going on. There were fights about territory, about belief, about everything! Kings were sending their troops, robbers were everywhere, people got killed and so much violence was just happening in their every day’s life that this obvious was reflected in the scriptures. Society is always reflected in its literature.

Those stories are entertaining for the public. I actually compared them to Bollywood movies today – there is violence, a love story, a bad and a good party and in the end the good one wins. A happy end for those who are entertained. With one difference: nobody started seeing Bollywood movies as the ultimate truth which you have to follow in life! And this is the problem.

When you ask , like I do, why there is violence and why God does wrong, strong believers answer that you are nobody to question him. After all, that is God and you are just human. Another answer is an attempt to justify strange actions of God: This is all God’s play!

It is a fact that those scriptures were written a long time ago. They were written by humans and for the society of those days. Today they are just not applicable anymore. You can see them as entertainment, you can take out a few of their beautiful pictures and messages but please stop using them as proof, stop calling them holy and stop thinking that what you read about is really God. It is an invention, it is fiction.

Does modern Technology spoil or enhance your travelling Experience? – 23 Aug 12

Happiness even through Ice-Cream – 5 May 09

Does getting yelled at increase your Effectiveness? – 7 May 14