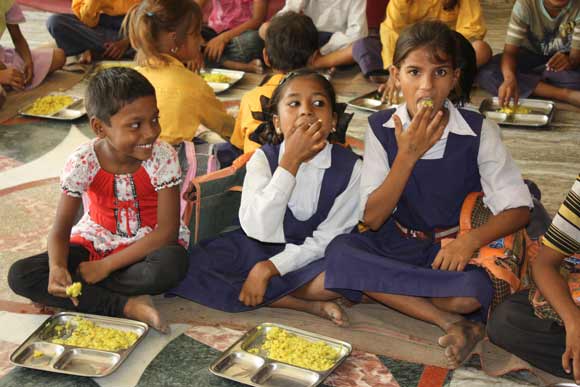 Yesterday I told you that there are Hindu organizations that dislike the missionary work of Christians who give food and support if poor villagers get baptized. I had the thought, if those Hindus have such a big problem with Christians helping people only in this condition, why don’t they ask all their Hindu gurus for help? The gurus could really give big donations to help poor people who don’t care anyway where their help comes from. As long as you feed them, they will remain Hindus. Then they could keep people from converting to Christianity and do something good for a change.

If someone from this organization read this now, he would probably leave a comment and say that I got bribed by Christian missionaries, too. They simply like to blame everything on people of other countries, nationalities and religions. Unfortunately this kind of attitude even leads to violence against people of other belief.

One such case happened when the Christian missionary Graham Staines was murdered with his two young sons in 1999. A group of angry Hindus had set the station wagon on fire in which they had been sleeping. All three of them died. The main culprit Dara Singh was convicted and sentenced first to death and later to life imprisonment. It was a big story in news many times, especially as Dara Singh was previously involved in the Bajrang Dal, a Hindu nationalist organization that I also wrote to you about.

This hatred does not lead anywhere but to violence, pain and hurt and at the same time it does not help any of those poor people at all. Think of food for poor people, not of a religion for them. If you frighten those away who have been helping them, you should be responsible for providing that same help, be that in food, money, employment or medical support.

Over and over again I reach the conclusion that religion has done and does still a lot of harm and separates people instead of uniting them. It seems that religion is something for people who have enough to fill their stomach. Religion is not for poor people. You have to do ceremonies, go to the temple, give donations, that all costs money. You cannot get blessings and good Karma without money. Poor people think of food, only well-off people think of religion. If you think of love as your religion, there is no question what poor people believe in, you have to help them, it is your duty as a human being.

Celebrating Diwali – not for Worship but for Happiness – 13 Nov 12