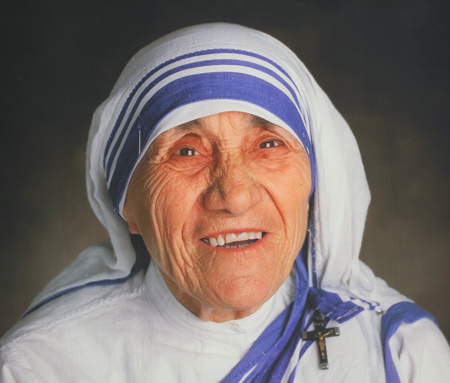 Today is a day that will be marked in history books as the day when Mother Teresa became a saint! Yes, today the Catholic Church will declare the nun a saint who had dedicated her life to helping the poor in Kolkata, West Bengal, India. Why exactly am I writing about this? For once, as I have always found it funny how the Catholic Church creates saints and on top of that because there are quite a few people who believe that Mother Teresa does not actually deserve this honour!

First of all, I have written already about the laughable process of becoming an official Catholic saint. A Christian life, a reputation of being holy and, finally, two acknowledged miracles! While you can try to be Christian and convince others that you are holy, it may be more difficult to persuade them that you have performed miracles! And you need a whole two of them! After one you get beatified, the second one opens the doors for you to become a real saint, to be canonized.

If you followed this rule around India, you would find thousands of applicants for becoming saints – because religious people here love believing in miracles and admiring the holiness of normal people. They just need to know how to impress the public! Oh, I forgot: you also have to have been dead for five years!

For Mother Teresa, Pope John Paul II started the process already two years after her death. Her first acknowledged miracle is the cure of an abdominal tumor of an Indian woman. The second one, recently recognized, is the cure of a brain tumor of a Brazilian man whose life was thus saved.

Oh well, you can imagine, if I oppose the ‘miracles’ that godmen in India use to fool the public, I obviously don’t think that any Catholic nun, priest or other person could really perform such a thing! The best part is that in those miracles, it is the DEAD saint, means its spirit, which actually healed the people… Wow!

Thousands, if not millions of people are expected to celebrate the fact that Mother Teresa will now officially be a saint. What else does this result in than popularity for the Catholic Church? Donations for their institutions, projects and so on!

On top of everything, there have been several voices telling that Mother Teresa had a hardline course of Catholicism, taking money from dictators and appreciating suffering as a part on your way to Jesus – all points which make people doubt the correctness of pronouncing her a saint.

The main thing for me is the wonder that this can still happen in a world like ours where you would think that science prevails. Scientific thinking however has no place where religion is concerned and that’s how we will keep on hearing about such ‘miracles’ in future, too!