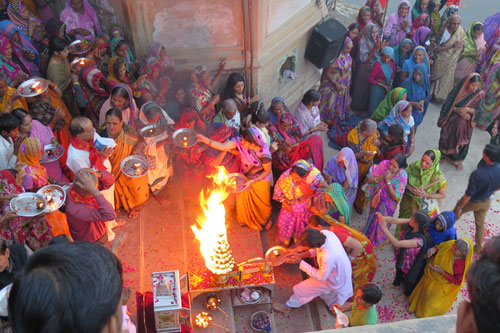 I told you many times that we enjoy having guests at the Ashram very much! It is really nice when you have people of different countries at one place, everyone sharing their thoughts and their opinions. Of course, they also tell us what they have seen and experienced in India – and a recent report didn’t only make us laugh but also gave us a few thoughts on people performing religious rituals, trying to make others participate.

Two of our Ashram guests had gone to Keshi Ghat, which is the place in Vrindavan where stairs lead into the river Yamuna. Currently the river has very low water but that doesn’t keep people from daily performing a fire ceremony for pilgrims to worship the river. The couple went to see this ceremony – and really, their report was first of all hilarious to watch.

Usually, people sit on the side and watch what is going on from a certain distance. They came to the place and were still wondering where they should best sit, when some pilgrims came and made movements for them to come along. They followed and soon found themselves in the middle of a crowd, doing things that they were told to do, in order not to hurt anybody’s religious sentiments and of course also to make this unique experience.

And unique it was! They told how they got pieces of dough to throw into the river, how they had to hold burning ceremonial candle holders, swing them around in the crowd while taking care not to burn their neighbours and even place little candle boats into the shallow river with the help of a long stick that they had to somehow balance on the way. At one point they were given a hollow horn of some kind which was then filled with milk and which they were told – with gestures – to hold over the river to let the milk pour in there. It was a balancing act, trying to hold the horn far enough out so that the milk would reach the water while trying to not fall over the barrier themselves! They were relieved when it was finally empty – and shocked when someone came by twice to refill it!

Back at the Ashram, they imitated the actions and caused big laughter among everyone. Obviously, they enjoyed and said they had been really involved but at the same time they were exhausted. It was a lot of noise, the river was not flowing and rather stinky and they had to do a lot of unusual movements. And they also made a little fun of those actions. And it is obvious: they did not really know what they were doing, what the logic or symbolism behind those actions was!

While I believe they have a great deal of memories from this experience and while we always recommend people watching the ceremony to feel the atmosphere, I also think they should not have been pulled in.

Really, if you are performing your own, obviously Hindu ceremony, and a person comes who is very clearly non-Hindu, so who doesn’t know your rituals and traditions, why do you try to get him to follow? If it is to show him your religion, it would not have been necessary to make this guest do all these things he didn’t understand. He did not get to know your religion any better through this! Do you want to show off your own religiosity? Again, for that you would not need to make another person do what you are doing! Or do you only do that to get a donation in the end? A religious farce for money?

Then again, I had to think about those Hindus who participate in the ritual. Many of them in reality don’t know either what they are doing! They just follow the actions which they priest does and which their parents and ancestors have showed them and repeated with them over and over again. They don’t know the symbolism or the implied sense behind it. So in a way, it is for them also just a game. A game with the benefit of a possible divine blessing.

I can understand that you would like to share the fun of a game with a foreigner. But let me tell you that this also exposes you to getting ridiculed, made fun of – and I know for sure you would not like that! So why can’t we just do it this way: if someone comes and actively shows interest to participate, let them. If not, just let them watch! Don’t force anybody and just do your thing.

And most of all, when you have a bit of free time, think of that river, its pollution and other problems and what a nonsense you are actually doing there! 🙂