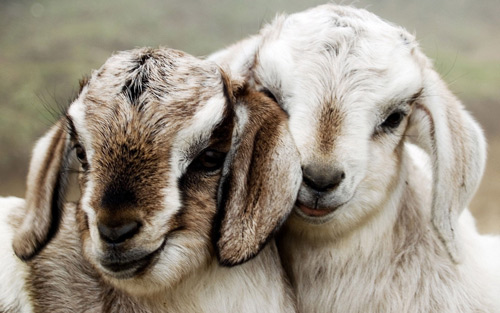 Today Muslims around the world are celebrating Eid. It is the most violent celebration in the religious year! Millions of goats get killed on the name of religion in an effort to please god. In this content, I don’t however want to write about being vegetarian or non-vegetarian. People develop their eating habits according to their surrounding and a lot of factors play a role there, too. No, my questions is: why do you kill so many innocent animals for a non-existing god?

I cannot understand which imaginary figure would be pleased by seeing the pain, suffering and death of so many creatures he himself had created! Wouldn’t he be rather angry about it?

Additionally, the concept behind this ritual is complete nonsense, too! You are supposed to sacrifice whatever is dearest to you in order to please god. The background is that Ibrahim, too, was willing to sacrifice even his son when god demanded it of him.

Again, why would your god be happy if you sacrificed whatever is dearest to you? Why would he ask you to kill your son? Why would he make you unhappy?

It is this story which costs millions of goats their lives on this day.

I just think it is good that a goat doesn’t have a god – otherwise they would sacrifice you instead!