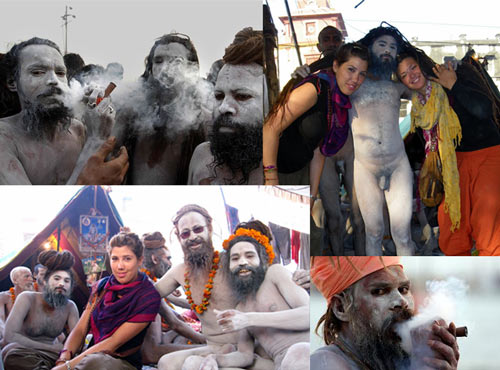 When you read anything about the Kumbh Mela, you probably think of the most famous scenes which are usually depicted in news: thousands of naked men running into the Ganges. Most people are aware of the fact that these men are not only naked for the holy bath in the Ganges – this is their regular dress: no clothes at all. They are called the Naga Sadhus and they are interesting enough for me to write a complete article about them and their philosophy.

Naga simply means naked, so they are the naked sadhus. You can say that they are the ultimate form of a detached sadhu. The principle of a Sadhu is quite clear: they practice detachment. They have cut all ties with their family so that they don’t get attached, they are always on the move so that they can remain detached from geographical locations and they don’t have a lot of belongings. They eat what they find or what people give them. They won’t store anything but just eat as much as fits into their hands.

A Naga Sadhu goes one step further and is not even attached to his clothes. In the process of getting more and more detached, this is the logical next step. When you don’t have anything anymore except for the clothes on your body but you want to get detached from everything, your clothes have to come off. If you have clothes, you have to wash them, too. While you are washing them, you need to wear something, so you need at least a second set of clothes. If you have two pairs of pants, you wear one and need to keep the second one in a bag or a piece of cloth. If you have a bag, you need to take care where to put it when you sleep and that you don’t forget it. If someone steals it, you won’t be able to accept it just as a fact – so you see, the attachment has already grown into a problem. The Naga Sadhus decide not to have any of this and remain naked.

Naga Sadhus are supposed to be so deeply in spirituality and love to God that they don’t care how they look like and don’t even care whether it is warm or cold. They don’t even have that much attachment to their body to save it from high or low temperatures.

That is how it is supposed to be and how it maybe was in older times. They had nothing and not even clothes. What you can see today is mostly that they have everything, just no clothes. Many of them have money, gold, jewelry, they are luxury sadhus! The regular, clothed sadhus these days have spent up to three million rupees on building and decorating their temporary tents on the Kumbh Mela! Just in the same way, the Naga Sadhus walk around, naked, but with precious rings on their hands and asking people for money while showing them their genitals. The Naga Sadhus know how to give a pose to the photographers and how to show their naked bodies to young western girls, knowing their pictures will be published in international media. They have drugs and thus don’t feel the cold. How much detachment is that still?

I heard that there are also female Naga Sadhus present at the Kumbh Mela, separate in another tent, closed from the public. If that is true, why don’t they sit in public display like the men do? Isn’t it anyway strange that if a normal person shows his genitals in public, it is offending and indecent behavior but when a religious man does that, it is fine! If you do it, you can get arrested and will most probably have to pay a fine. If they do it, people take pictures of them, the pictures are printed all over the world and everybody is fascinated, not offended.

Isn’t it a strange world?

You are either fully Vegetarian or not at all! – 6 Feb 09

Gurus should look for Students, not for Followers and Disciples – 3 Jul 12