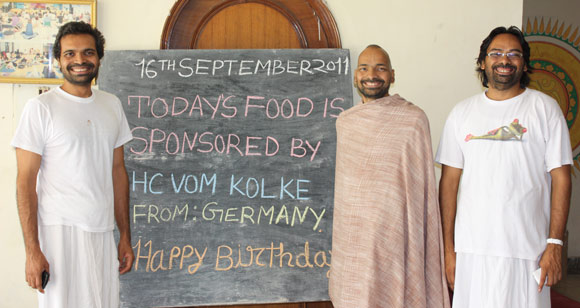 As we are already talking about the topic of suppression of women by religion, I thought I write down some more of my thoughts about this. I consider myself as not being a Hindu anymore. I don’t accept the religion of Hinduism as mine anymore. I have been asked by people how that can be, as I use Mantras in my work and always recommend Mantras to others. I answer that if I accepted Hinduism as my religion, it would include accepting a suppression of women that I don’t agree with. Let me explain this to you.

You may not be aware of this but strict Hindus believe that women are not allowed to read scriptures such as the Vedas. They are not pure enough to read them. That is a subject of men and in their opinion should remain one. Many people forget this or don’t regard this anymore in their daily belief but there are still many men who strictly forbid their wives and daughters to touch the holy books. In a normal Hindu temple you will not see female priests. They are not pure enough for the service for God. Women are not allowed to touch the statue of God or even go as close to it as men do. There are many more situations in which women are in some way ‘second grade’ and not pure enough. Ceremonies, scriptures and a lot more religious actions are forbidden to them.

You will not see female priests and you will not see female Sadhus. Sadhus are the holy men of India who wander around the country without attachment to anybody or anything. They are fully free and only devoted to their God. They get a lot of respect for their devotion. A woman can never reach this state.

The female impurity is even stronger during their time of menstruation. In that time they are not allowed to even enter the temple. Not only the temple though, even their own kitchen is taboo in that period! Why? Because they are considered as unclean and impure during menstruation. This is a tradition widely practiced across India. Men believe that food gets dirty and inedible if a woman touches it who is currently menstruating. In some homes and areas, women completely retreat from company of men during those days because some men believe it would spoil their day to even look at a menstruating woman. I have heard of westerners that they were asked in some Ashrams to wear a visible sign during their menstruation in order to indicate to men not to speak to them and to the kitchen to give them food separately as they would make their complete surrounding impure if they ate with everyone else.

If you hear all this, you may really wonder about this religion. It is quite normal though, people are used to it and many Indian women agree to this practice. They have grown up in this way. I nevertheless ask myself how people can believe that this is God’s will. Why would God want women to be worth less than men? If men can read a book that you consider holy, why would women not read it, too? Why is it a sign of impurity when they go through their cycle, the most natural process on earth which makes life possible?

With the experience of years of working in this field I know however that there are always more women interested in religious matters. Programs are full of women, temples are full of women but still they are the ones discriminated. Instead, they are treated as impure. The reason for this is the male-dominated society in which men wrote scriptures and created rules. That cannot be God’s wish.

So you see, I cannot accept this religion from my heart because I see all its limitations. If I accepted this religion, I would have to accept that the Mantras that I share openly with everyone should actually only be given to men. I would have to tell women that they are not pure enough to recite them. Hinduism would not allow me to give those Mantras to any woman.

If you ask me why I don’t give up the Mantras then, too, as they belong to Hinduism, I have to ask you why? I love Mantras and I see their good effects in calming the mind, bringing you will-power, mental strength and more. I believe they are good for everyone. I can take the good parts of every religion. Why not?

If you have grown up in a Christian culture, as a member of a church, and you decide to leave church, you will still keep the basic values of Christianity, won’t you? Love and compassion for others is not something that you leave behind with your membership in a church. Those values are right and worth keeping. I don’t see anything wrong in believing in the good aspects of different religions. Female suppression is however one of those aspects that I happily leave behind. Gender equality and fairness is something that you don’t need a religion to teach you.

Have Confidence in your Feelings – 12 Dec 09

What would you do if you approached a girl and she refused you? – 7 Oct 12