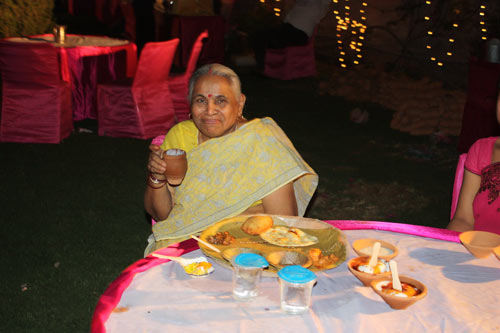 In the past days I have been writing about all those religious customs and traditions that Hindu families usually follow but which we refused. At the side I mentioned that there is a tradition of a feast on the 13th day after a death in a home. It is called ‘Terahvi’.

Religious people anyway spend the days after a death in their home with lots of rituals and daily a priest comes by to have them to one or the other ceremony. This day however is the most important one because it will end their state of impurity. There are rituals to do, again according to the instructions of a priest, and the main and most important thing to do on that day is to organize a feast.

At first you feed 13 Brahmans, give them clothes, give them money, pots and other household items. They are the most important guests and they get a whole lot of gifts along with the food. That’s not it however! Apart from that you then need to feed as many people as possible. People feed 50, 100, 500 or 1000 people, according to their social stand and financial position.

That is where the problems start for many people and why this practice is not only unpopular with unreligious people like us: this feast has become a kind of competition on who can feed the most people for the death of their loved ones. The more people you feed, the more you loved the person close to you. What however should people do who cannot afford that much? People who have taken loans even to just marry their daughters because they had to give high dowry? Imagine their situation when suddenly someone dies and they are expected to invite the whole town! It would completely ruin them!

Although there are people who are now opposing this tradition, it is still very normal and people were surprised when we told we would not do anything. For some people this obviously meant that they could boast with their feasts. One man told he had fed 900 people when his wife had died! Well, fine, what do you mean to say with that? That you are better in mourning than we are? If you like, you can show that off … We knew however that we would not want to organize a feast, a celebration, just 13 days after Ammaji’s death.

This is what these feasts often feel like! A celebration and people are happy that they are now not impure anymore. No, we would not have been able to do that and we don’t see why we would feel like inviting a lot of people and show others how much money we can spend on this occasion! We are not keen on showing off, we don’t believe we were impure in the complete time and we don’t do any rituals.

When people then ask us when they should come for this feast, we tell them that we don’t do any. Babbaji’s friends, too, who had heard of his old friend’s visit, asked and Babbaji denied, we would not do anything. In the end, none of this circle of people came at all and we are fully happy with that.

At the end, there is only one thought that remains: if the ceremonies of that day make you pure again and we did not do them, will we remain impure in religious people’s eyes? Will they never come again until we have done that ritual?

An interesting thought but I don’t think people will go to such extremes!