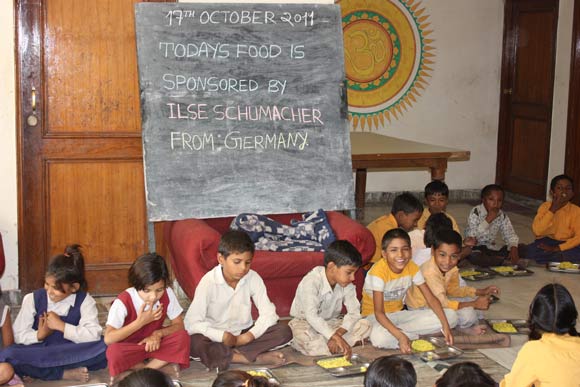 Last week I explained that many westerners come to India looking for Siddhis and for those who have Siddhis and might show them how to achieve them for their own lives. As there is demand for such people, others make this offer and the number of gurus in this business grows daily. Not everybody starts showing off his fake Siddhis by magic tricks right away. Many begin their guru career as simple preachers and especially in Vrindavan we have many of those preachers.

We once had a person who worked on our website for us. That was before we took care ourselves of uploading pages on the website, updating content and making that content look nice online. He was the one who was supposed to do all that but after some time we noticed that he spent more time of the day downloading and watching movies than doing our work which is why any requested change on the website took rather long. We had to fire him and started doing this all ourselves which we are very happy about now.

Some time ago we got to know that our former employee was not anymore working on improving the websites of other people but had created his own website, had set up profiles on social networks and had started another business: he had become a preacher.

Online we saw pictures of him in full spiritual clothing instead of the suite that he used to wear, his hair grown longer and the make-up of a spiritual person in the face. For us it was quite funny to see this ‘holy’ getup and to read his advertising in which he of course told about his lineage, his guru and his tradition, his lifelong devotion to Hindu practices and scriptures as well as to the service of Krishna.

When he once came by at the Ashram again, I had some talk with him. I told him that I had heard about his new profession and asked how come he had started that. He answered ‘Well, you have to do something for a living!’

So you see, this is how dozens of preachers can be born in this town every day. They try to get a job according to what they have learned or what they know. If they have good qualifications, it can work. If it doesn’t, they often go into the preaching profession. Why? Because Vrindavan is always full of religious pilgrims. They come from all over India and from abroad on their pilgrimages and stop here in Vrindavan to do pooja at the river Yamuna, to go to the old temples Banke Bihari and Madan Mohan and maybe do some sightseeing at the ISKCON temple. And many love to have some extra program by hiring a priest or a preacher to tell them some stories of the scriptures, perform a ceremony with them or help them go to the religious places in town.

When you come as a pilgrim to Vrindavan, you come for your good Karmas. Doing the ceremonies and taking the services of a preacher to listen to devotional stories or to sing Mantras and Kirtan is part of increasing your good Karma. Someone who was born and grew up in Vrindavan usually has heard the main stories that are there to tell and some extra points for a lecture are quickly learned. Everyone can become a preacher and young people who want to start a business in Vrindavan often decide to go for this profession.

I do not want to blame anybody for taking up this profession because it is their way of securing their survival. They work for their living and it has to be appreciated. By explaining how they come into this profession I want to take the magic and mystery away from this idea of holiness that some people have. It is a business like every other. People learn a bit, there is demand and they make their offer in the market. They are not holy and they are not more blessed than you. Instead of calling them preachers, you should call them entertainers. Religious make-up and getup doesn’t make a person holy. Maybe some of them have worked in an office before. There could be some who actually devoted their lives but you might have to search for them.

Don’t fall for the illusion of holiness but dig deeper.