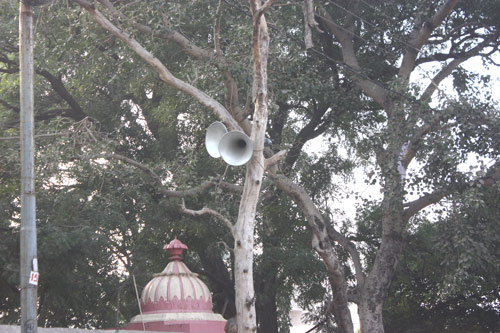 Today, on a walk through the Ashram, we could hear some music. It was not the soft bells of the temple service we often hear but the sound of music and someone singing, which is also not very unusual but unfortunately normally louder than the bells, as it is transferred via loudspeakers. It got louder and louder the closer we got to the gate and until we were at the road, it had reached an unbearable volume. It is no wonder that I started thinking about the mindset of religious people once more!

Purnendu walks the Parikrama Marg every day. It is a pilgrimage walk that goes ten kilometers around town and thus leads past a lot of temples. He walks it for exercising but of course while walking by, he sees what is going on in the temples. While we were walking back from the road, so that we can talk, he told me that in the temple where the loud noise was coming from, there were just a handful of people sitting. It was rather empty and you could just the sound of that music – not very melodious but it wouldn’t have disturbed people outside. Unfortunately they had the microphone and the horrible speakers on full volume. Inside I can imagine that they have a nice atmosphere with just their ten to fifteen people, by themselves, maybe enjoying their time – but outside it sounds like there is a band and a choir singing for a thousand people, so that they had to put speakers, as they could not all hear it live!

My conclusion, and that’s not the first time that I have it, is that religion is full of hypocrisy. They have a small ceremony or service for worship inside – but more important is that the whole area hears it! Wouldn’t it be just enough to pray for yourself? Religious people are not as interested in their religion as they are in showing off how religious they are! This is a realization that I have had long ago but there are just again and again signs that it is really true.

Do you have religious people among your facebook friends? And have you seen them post photos of gods or write psalms, mantras or verses from scriptures? God has not made a profile on facebook – so whom are these people showing that they are religious if not god? Obviously they want to show their relatives and friends how religious they are! They do it for others, to show the extent of their devotion – and maybe that they are more devoted than them?

Here in India, many religious people of the high caste keep one strand of hair in the back of the head long. Muslims and Sikhs keep their beard or the complete hair long. They say it is done to have a better connection with god – as if their hair would help them tune in on divine frequencies. In reality, they want to show and let everyone know that they are more religious, have a better connection to god, are from a higher caste and just better than those around them who don’t have that hairstyle! Because we all know that there is nothing more divine in having long or short hair!

I believe that all these stupid ideas and rituals, this showing off has made more harm to the thought of god, religion, belief and faith than it has done good. Intelligent people are turned off by this and walk away easily from a religion that is full of hypocrites who want to show off.

Or who want to blast out their service and worship to god into the whole area, like at a rock concert, making it difficult for people to have a conversation anywhere nearby.