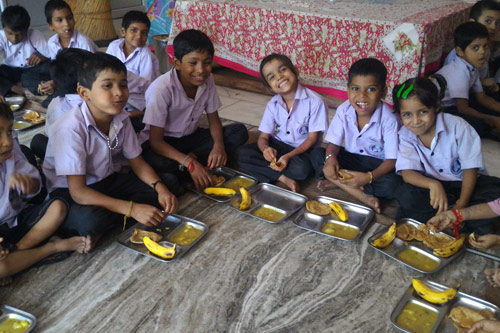 Choosing in between feeding hungry Children and Monkeys – 23 Aug 16

Yesterday, it was the birthday of a dear friend of ours from Germany. Her name is Susanne and she has been supporting us for several years already. She has been here with a group of natural hair dressers and we had great workshops, sessions and also beautiful private time together in the past. She sponsored the food for the children on her birthday – and gave some extra, so that we could buy bananas for them as well!

Just a few hours later I was at the restaurant and looking outside at the traffic, when a car stopped in front of our building. The passengers opened the windows and started throwing bananas out of the car. In no time, there was a big crowd of monkeys, all trying to catch at least one banana, if not two or three! They were fighting for them and finally, when there were no more coming, they ran away with whatever they had been able to snatch. The car moved on.

I saw these two distributions of bananas and I wondered: why would someone distribute this food to monkeys instead of children?

It was the most beautiful thing to see the joy about a banana in the kids’ eyes! We distribute fruit from time to time, whenever it is in the season and we can get it easily in high quantity, so that the children get some vitamins. We know that they don’t have a lot at home because fruit is expensive buy! So giving them fruit – or food in general – is something that doesn’t only fill their bellies but our hearts, too, knowing that we helped these families to feed their children and that in a way that will help them grow.

Those who like feeding the monkeys – and that was not a single occurrence today, it happens more often – have another idea. They believe it is something that god approves of. Many of them will be the ones worshipping monkey god Hanuman and believe by feeding the monkeys, they are directly serving god.

If they serve god, god will be nice to them. They will get good health, luck, success and so on. They feel satisfaction after feeding the monkeys because in the end, it will benefit them. It is a selfish wish that makes them distribute those bananas.

For residents however, this means there will be more monkeys on the roads and in the area. More monkeys is nothing anybody here would appreciate. Not only do they go on rampages in your garden, breaking your plants but they are actually dangerous! In the city, people fell from their roofs and died because monkeys came in clans to attack them – for whatever food was in their hands or simply because they felt it was their ground. The government has made various plans to take care of this problem – catching and castrating them, bringing them to jungles outside of the town and more. They come back and they keep on creating problems for the people living here. But religious people believe it is a virtue to feed them.

Now tell me what makes more sense: distributing fruit to hungry children and feeling good about it or feeding it to wild animals and thinking that a fictive being would reward you for it?