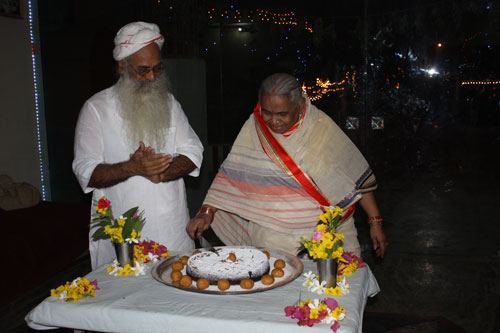 We had not told many people about the passing of our mother and rather allowed the news to spread on its own. Each of us had, however, naturally called his best friend and Babbaji had called two or three more people who had been close to Ammaji or him. It was the reactions of some of them which made me very upset with religious traditions – because they hurt my father!

On Tuesday morning, the day after Ammaji had left, we saw one of Babbaji’s friends walk in through our gate. Our pain was still very fresh and we were again and again looking after Babbaji to see how he was, now that he was alone. So when we saw this old friend, who had stayed at the Ashram for months at a time before, too, we were very happy and thankful. We thought what could be better than having an old friend there with whom Babbaji could talk about old times, share stories about Ammaji and just sit in company, alleviating the pain a bit!

Purnendu, who was outside, greeted him before he called Babbaji. We were all busy in reorganizing the tasks that Ammaji had always looked after, so we, the children, did not sit down with them. Just a few minutes later, Babbaji came to us in the office where we were just discussing something. He told us that we should see whether we had a room free upstairs where his friend could stay and asked us to prepare it so that he could send him there.

When he left the office however, his friend had gone. He had simply left! He had denied drinking water or tea, he did not stay, he had not even said goodbye to anybody! Everyone was just surprised and a bit shocked. And of course, my father’s feelings were visibly hurt! Why had he come at all, all the way from Delhi, just to take off again within ten minutes? He had nothing to do in Delhi either, so why could he not have stayed? And how come he just left without a word to anybody?

In the afternoon, this friend called and when my father clearly told him that he did not like such behavior. He answered that this was what they did in his family, his tradition and belief. ‘We go to meet but we don’t stay there, we don’t eat or drink but just come back!’ He continued that he would come on the 13th day after Ammaji’s death, when we would be clean again but my father told him not to – we would not be doing any rituals or a feast which religious people expect on that day.

When a common friend of Babbaji and this man called, Babbaji told him the whole story and said how much it had hurt him and the whole family. He told this man not to come at all, because he would do the same thing and it would cause even more grief.

We talked with my father about this incident and we all agreed that we did not need such people around in our time of grief. Our father obviously was suffering from loneliness after his wife’s death and even though we are around as much and Yashendu even slept in his room, it would have been great to have someone of his age here, someone to remember the past times when they all were younger. Instead of this support he gets insulted by religious superstition. 50 years of friendship is not as important to them as their religious customs.

Babbaji remembered how people had come in the time after my sister’s death, too, giving their advice on what we should be doing, which rituals had to be done, asking whether we did it this or the other way, trying to make us perform ceremonies we did not want to do.

So we decided to tell anybody who even asked such things on the phone not to come. We don’t need their unnecessary religious advice, we don’t need their insults – even if they are not caused by ill wishes but by stupid religious customs. What we could use would be their love, compassion and support. But if you cannot give that, you don’t need to come at all.

Yoga Teachers! Do not worry about Perfection! – 28 Oct 10