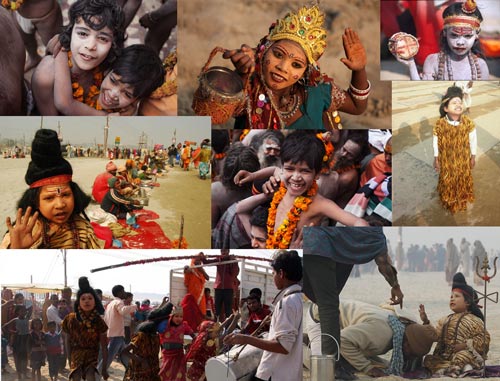 Yesterday I explained the background of the Kumbh Mela and how a short story in a scripture created the biggest religious festival on earth. The Kumbh Mela started in 14th January in Allahabad and from the very beginning I saw a lot of things in the news that I thought I would like to write to you about. Let’s start with one thing that is very close to my heart: the children and what wrong is happening to them on the name of religion.

On the first day of the Kumbh Mela, all TV channels showed scenes of what was happening at the festival. One shot caught my attention: there were small children, between four and seven years old, standing on the ways of the festival area, dressed up as Gods. One boy was in a Shiva costume, a girl represented Lakshmi. Some of them had a piece of cloth in front of them, others a pot and you could see the coins that passers-by had given them. They just stand or sit there and strike a pose. They have been told how to hold their hand as though they are giving blessings.

People who walk by look happy, laugh and find them cute. They don’t only give them money, they even take blessings from them, touching their feet and treating them as though they were really gods. They worship them, they encourage them to go further on this way and approve of them sitting there in all ways. They believe it is spiritual and good. I just cannot understand!

The very first thing is that I really have to wonder about the parents. Do you think you are doing something good for your child? You are sending your little one begging! Yes, that’s what it is – it is not better just because it is in a religious costume! It is just like the children in big cities who paint a mustache in their faces and make little tricks to get money. And what do you do with the money? Will you spend it on their education? I highly doubt it!

You ruin the childhood of these children! I read about children, below the age of 14, who were initiated as Naga Sadhus on the Kumbh Mela. Naga Sadhus are those sadhus who never wear clothes. These children obviously won’t ever go to school, they will only learn the way that these sadhus live and will not know better than begging their whole lives long!

You, the one who is going to this celebration and walks by these children, you also have a responsibility! Yes, you do! If you give such a child even one rupee, you are supporting and encouraging this exploitation of children! You give them and their parents the message that this is the right thing to do! If you give the argument that they are from poor families and in this way the family earns money, I have to call you out to give money to the family for food while the child goes to school! I bet that none of the people who give money to these children would like his or her daughter to be in that child’s place!

Religion does not help these children, religion destroys their lives. They go begging. It is a religious and spiritual way of begging but it remains begging. It remains exploitation of children. It remains wrong. 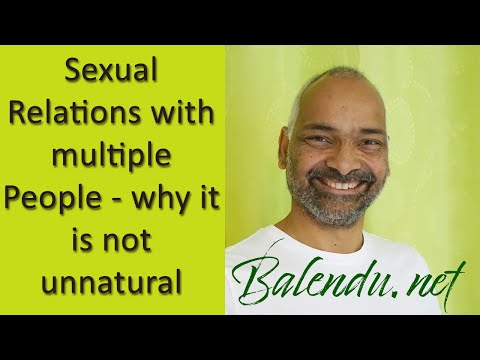 Sexual Relations with multiple People - why it is not...

God is not against Condoms and Contraceptives – 24 Nov 10