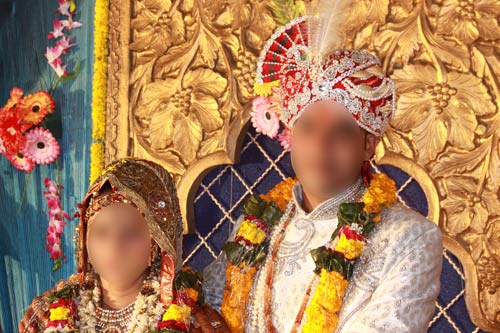 After mostly concentrating on the situation of marriages and divorces in the west, I thought it would be nice to end the week with a look at how things are in India. How do people see marriages, how many divorces happen, how many long-term relationships are there and how to people see them?

In India marriage is just a normal part of life. It is what everyone does and that is why you will do the same thing, too. You grow up, knowing that you will get married. You will have children and your family will go on. Traditions will be carried on, your children will get older and marry, too, and whoever does not get married is pitied. That is life and everyone usually accepts it as it is.

Another factor is that sex is still seen as something that only married people have. You are supposed to have sex only and exclusively with your spouse. You marry and then you have sex, not the other way around. Even though the reality is that people have sex before marriage, too, nobody will openly say that! Officially, all Indians are virgins when they marry.

Of course, with India being a religious country, religion also plays a big role in that. Marriage is one of the 16 most important rituals of Hinduism. It is the second last, before the ritual that comes after your death. So every religious person anyway has in mind that he or she wants to marry and do this holy act which gives you again the blessing of God. Again, sex is sanctioned only after marriage.

It is thus maybe not very surprising that people accept the concept of arranged marriage. You have to get married anyway. If you go around and search for the perfect partner, you might spend years and run the risk that you may never be successful. So why not just marry someone who is chosen for you? Again, everybody or at least most people have this kind of marriage and it seems to work, so why not?

Really, in India marriage still seems to work! The divorce rate is much lower than in other countries! That sounds as though marriages are much happier here! But I can promise you that you cannot see the actual situation by the figures of any statistic. The divorce rate is low but for a big part because a divorce is a scandal! Additionally divorced women still have a very difficult position in society. Without a man by their side they are often not as respected as they would be as a wife and they may have difficulties remarrying, too. This is why many people who were unlucky with the choice of spouse that their parents made nevertheless stay in their marriage and try hard to make it work – or give up in a way and just live without really loving their partner. There is no trial period in arranged marriages. Once you are married, that’s it. Or the social stigma of divorce.

Nevertheless however divorce rates are getting higher and I believe it has a lot to do with the spreading of education and the decrease of religion and traditions. Women learn more about their rights, people understand better that once married in front of God does not mean you have to stay together forever, even if there is no love, and so more and more people take this step, although it is still difficult.

Times are changing and this is how you can nowadays read headlines in big cities saying that couples are ‘living together’ or ‘living in a relationship’. Maybe modern city families can allow young people to have a boyfriend or a girlfriend. And the young go with the example of the west as well as India’s most popular high society: the Bollywood film stars. In Bollywood the rules are different. Stars like actress Kareena Kapoor can have relationships and live together with each other for years without marrying. Maybe they are setting the trend for modern youth.

One cannot say all in all what is better, the situation in India or in the west. A generalization is difficult. Wherever you are however and however your relationship looks like, I wish you both are in love and happy with your lives. Because that is the most important part!

Celebrating my Birthday, forgetting the Count of Years and loving my Life! – 14 Oct 15

Looking back on three Months in Europe – 12 Aug 14